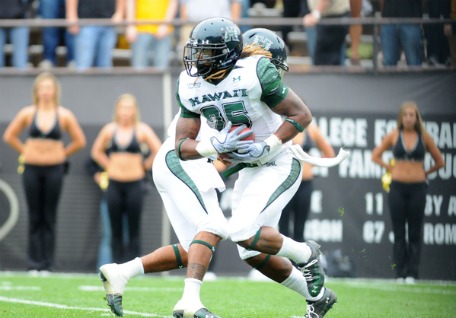 With the No. 96 pick in the 2011 NFL Draft, the Green Bay Packers selected Hawaii running back Alex Green.

Before you anoint Green as the second coming, it should be noted that Hawaii runs a spread offense with multiple receiver sets, so Green’s gaudy yards per carry average is certainly somewhat a product of that.

Still, the Packers’ choice of Green is a good sign [intlink id=”77″ type=”category”]Brandon Jackson[/intlink] won’t be back with the team in 2011. Jackson is a free agent and Green is a great candidate to take over his traditional role as third-down back.

Here’s what NFL.com has to say about Green.

Green does not project to be an every-down back at the next level, but he is a weapon in the passing game and could contribute on third down. He has prototypical size, but he runs a bit upright and will not consistently break tackles in the NFL. He also has a case of fumble-itis. He excels in the passing game, as he shows the ability to consistently get open, catches the ball away from his body and turns upfield without any wasted motion.

Green is a physically gifted ball carrier with the athletic skills and running abilities to make it at the next level. He offers potential as a second back in the NFL if he rounds out his game and carries the ball with more physicality.

What’s interesting is NFL.com had Green rated as a late-round pick and Sports Illustrated projected him as a sixth-rounder, so [intlink id=”20″ type=”category”]Ted Thompson[/intlink] must see something he really likes. It should also be noted that the Packers have chosen three offensive players with their three picks thus far in the draft.