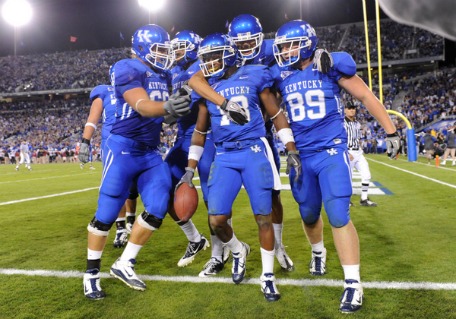 Cobb spent his share of time in the end zone.

With the No. 64 pick in the 2011 NFL Draft, the Green Bay Packers selected Kentucky wide receiver Randall Cobb.

There’s a lot to like about Cobb, who was a first-team All-American in 2010, but to be succinct, the Packers haven’t had a player with his skill set in some time.

And guess what — he can also return kicks and punts. He averaged 23 yards per kickoff return and while his punt return average wasn’t impressive, he did take one back for a touchdown in 2010.

Even if he doesn’t play much receiver for the Packers in 2011, Cobb is a guy who can help the team right away.

Cobb’s a ‘tweener lacking the size to be a full-time back or the ball skills and deep speed of a pure receiver. However, he could still make plays as a scat back, sub-package slot receiver and as a returner. Plays his best in the biggest moments. Possesses solid vision, enough quickness to get the corner and gain yards after short passes but isn’t a true home run threat. Could be an effective third down back with his short area speed and route-running but hands need to be more consistent and he has a ways to go in pass protection.

Positives: “Versatile skill player who positively affects the offense in a variety of ways. Shows terrific quickness, has a burst of speed, and is dynamic handling the ball. Fluid receiver who comes back to the pass out of breaks, easily adjusts to the errant throw, and possesses both soft and strong hands. Quickly transitions from making the catch to running after the reception, shows a burst of speed, and has the ability to create yardage in the open field. Quick footed and elusive, displays terrific explosiveness, and plays with intelligence. Effective running reverses, alters the momentum of games as a return specialist, and occasionally lined up behind center in wildcat formations.”

Negatives: Not a true deep threat. Really cannot run to the long pass.

Considering what he brings to the table, I like the pick. The Packers have added a true multi-pronged threat to an offense that’s already one of the most dangerous in the NFL.

Here’s a taste of what Cobb can do. I think you’ll like what you see.

Previous Article
Hooray! The Lockout Is Back On!
Next Article
The Book On Packers Third-Round Pick Alex Green