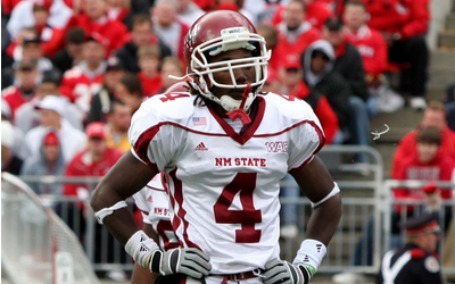 House is a physical corner that excels in press coverage, and could develop into a starter in a Cover-2 scheme. He uses his big strong hands to jar receivers on the line of scrimmage and he can flip his hips and run. He also shows the ability to anticipate routes in zone and has enough speed to close with the ball in the air. However, he is a bit stiff in transition and will struggle to mirror receivers on double moves. His ultra-aggressive style of play makes him vulnerable to ball fakes and he will probably be flagged often.

Here’s the SI.com analysis of House.

Positives: “Athletic cornerback with good size and ball skills. Fluid pedaling in reverse, quick flipping his hips, and smooth in all his movements. Plays heads-up football, shows a burst of closing speed, and effectively positions himself against opponents to defend the throw. Fast up the field to defend the run and aggressive with opponents throughout routes. Displays the ability to drive to the ball out of his plant.”

Negatives: Does not take proper angles to the action in run defense. Loses a half step out of his transition turning to run with opponents. Slow reacting at times.