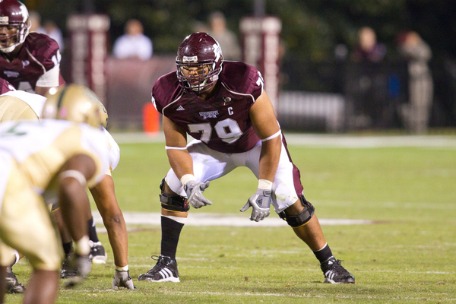 Your right tackle of the future?

Well, it took forever, but that’s the price you pay for being Super Bowl champions.

With the No. 32 pick in the 2011 NFL Draft, the Green Bay Packers selected Mississippi State tackle Derek Sherrod.

The Packers actually had multiple options with the pick — there were several pass-rushing outside linebackers available, most notably UCLA’s Akeem Ayers, Arizona’s Brooks Reed and Georgia’s Justin Houston.

In the end, [intlink id=”20″ type=”category”]Ted Thompson[/intlink] decided to protect his biggest asset, [intlink id=”25″ type=”category”]Aaron Rodgers[/intlink], by drafting a tackle in the first round for the second year in a row. Unless Sherrod is a monumental disappointment, the Packers look set at the tackle positions for the foreseeable future.

Sherrod won’t be forced into the starting lineup immediately. [intlink id=”225″ type=”category”]Chad Clifton[/intlink] probably still has one season left in him at left tackle and [intlink id=”925″ type=”category”]Bryan Bulaga[/intlink] will only get better in his second season as a right tackle — like Sherrod, he also played left tackle in college.

In all likelihood, the Packers will move Bulaga back to left tackle and put Sherrod on the right side when Clifton retires.

We’re ahead of ourselves right now, though. Let’s take a look at the newest Green Bay Packer, Derek Sherrod.

At 6-5, 321, Sherrod is a big boy, if nothing else — those certainly aren’t the measurements of a guard. Although he’s a large man with a huge reach (85-inch wingspan), Sherrod could stand to add more muscle to his frame.

On the plus side, Sherrod is quick, mobile and athletic. The knocks against him are he’s not strong enough and doesn’t play with a mean streak, something the Packers seem to require in their offensive linemen. Sherrod can and has been beaten at the point of attack by stronger, tougher guys.

In other words, Sherrod is a finesse tackle, not a road grader, which could make him better suited for the right tackle position in the pros. It also means he’s a fine pass blocker and as you’ll see NFL analyst Brian Billick point out below, he’s perfectly suited for a pass-first offense.

Positives: “Athletic blind side tackle with a lot of upside. Plays with good lean, keeps his hands active throughout the action, and stays square. Better than average quickness off the edge, can slide his feet, and is a terrific position blocker who seals defenders from the play. Fluid moving around the field, quick out to the second level, and redirects to linebackers, taking them from the action. Blocks with good knee bend and pad level.”

Negatives: Possesses average strength at the point of attack and struggles to finish off opponents. Much better pass protector than run blocker.

NFL.com’s analysis is much the same.

Sherrod currently looks more like a backup but could be a future starting tackle if he can add quite a bit of bulk and strength. A nice blend of length and good feet, he can slide laterally with pass rushers and push them by the launch point but struggles to anchor against the bull rush. Could benefit from improving awareness against pressure looks. Uses positioning and instincts as a run blocker to create running lanes but isn’t an effective drive blocker and won’t push defenders backwards. Has a solid makeup but doesn’t possess a non-stop motor or great aggressiveness.

The great thing is the Packers don’t necessarily need Sherrod to start right away. They can develop him, integrate him into the system and bulk him up in the weight room for a year before they need him to play a huge role on the field.

All in all, it looks like a solid pick.

With that, here are your obligatory Derek Sherrod videos.