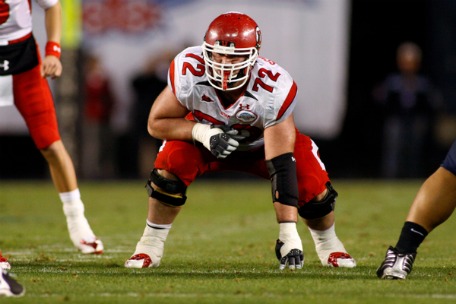 The Packers are stockpiling offensive linemen.

The Green Bay Packers traded their final fifth round selection to the San Francisco 49ers and landed pick No. 174 in the sixth round and a seventh-round pick (No. 231). Ted Thompson then turned around and traded that pick to the Miami Dolphins, along with the the seventh he just acquired, for the No. 179 pick and the No. 218 pick.

After all that, the Packers selected Utah guard Caleb Schlauderaff at No. 179.

Schlauderaff looks like a grinder in the mold of Mark Tauscher.

Schlauderaff is not a very athletic guard, but he always seems to get the job done. He is a well prepared player that never seems to be out of position. He plays with a “bad attitude” and fights through the whistle. He can be an effective run blocker, but he loses leverage at times and plays with a narrow base too often. His slow first step and limited athleticism may prevent him from being a starter at the next level, but his toughness and work ethic will likely get him a spot on an NFL roster.

With their second sixth-round selection, the Packers picked up D.J. Smith, a linebacker from Appalachian State. Smith had 144 tackles as a senior.

Positives: Thick, compact linebacker. Scrapes down the line, stays square to get to the ball. Adept at picking up running backs in the flat. Good change of direction in tight spaces, able to break down and stay low to wrap up ballcarriers. Excellent wrap-up tackler in space, hustles to the ball well. Rips off tight end blocks at the second level to make plays. Gets to the first down marker when dropping into coverage, also capable of pounding receivers in intermediate-to-deep zones. Good delayed blitzer, corrals most QBs in the backfield and can get up quickly to block passes.

Negatives: Shorter than scouts prefer, has trouble finding the ball inside at times due to his lack of height. Has short arms, limiting his ability to grab NFL backs on the way through or get off blocks. Relies more on hustle than straight-line speed to make tackles. Catches more than explodes into ballcarriers. Overruns plays, leaving open cutback lanes. Gets moved out of gaps easily by offensive linemen. Gets sucked up by play-action. Marginal fluidity in his drops. Gets blocked too easily by running backs on blitzes. Strong backs can lower the shoulder to push him downfield. Tackle numbers early in his career inflated by liberal rewarding of assists.

Positives: Three-year starter at end for the Wildcats is a high motor prospect who led the Pac-10 in sacks each of the past two seasons. Relentless in pursuit of the quarterback. Can be very quick off the snap in spurts. Has a fast wide rush and a good inside move to counter. Recognizes plays well, and is a secure tackler. Played both right and left end as part of a three-man rotation as a senior. Team leader and high effort player.

Negatives: Quickness off snap varies considerably. Wasn’t productive against top competition. Has trouble disengaging from blocks. Doesn’t play with a lot of power. Not stout against the run, can be controlled and pushed around and lacks an inspiring bull rush. Can change directions but is neither fast nor overly agile.