Lockout Is Over, At Least Temporarily 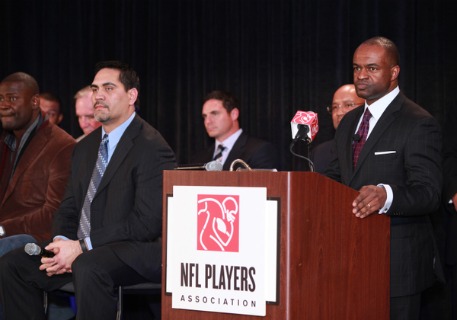 Smith and the players got a win today.

The NFL’s lockout is over, at least temporarily, after U.S. District Judge Susan Richard Nelson granted the players a preliminary injunction Monday.

The ruling is a victory for the players, who claimed the lockout was hurting their careers. The NFL filed an appeal in the 8th U.S. Circuit Court of Appeals in St. Louis.

The plaintiffs “have made a strong showing that allowing the League to continue their ‘lockout’ is presently inflicting, and will continue to inflict, irreparable harm upon them, particularly when weighed against the lack of any real injury that would be imposed on the NFL by issuing the preliminary injunction,” Nelson wrote.

Theoretically, the players could again show up at team facilities and have contact with coaches. It could also mean free agents could begin signing contracts, although the rules haven’t been spelled out for such business because their is no collective bargaining agreement.

“They better act quickly, because as of right now there’s no stay and, presumably, players could sign with teams,” he said. “There are no guidelines as of right now, so they have to put something in place quickly,” said Jim Quinn, an attorney for the players.

Finally, the league must determine if offseason programs can begin while the appeal is heard.

Nelson originally heard arguments on April 6. She then ordered the league and players to resume mediation with a federal magistrate. The two sides met for four days, but won’t meet again until May 16.

With appeals, the legal proceedings in this fight will probably continue into summer.