Cameron Heyward: The Good, The Bad And The Ugly 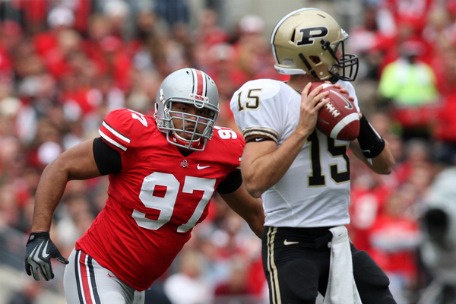 Heyward has the bloodlines, but won't be an elite pass rusher.

Ohio State defensive end Cameron Heyward has been the popular pick for the Green Bay Packers in a lot of mock drafts, recently.

It’s not a surprise. Heyward seems to be floating somewhere in the 25-to-32 range, he’s projected as a 3-4 defensive end in the pros and the Packers will be down a man at the position when Cullen Jenkins leaves via free agency, whenever that starts.

In his only workout this offseason — Heyward was recovering from Tommy John surgery — he posted a time of 4.95 seconds in the 40-yard dash and a 35-inch vertical.

Heyward obviously has size and speed. He also has the bloodlines — he’s the son of former NFL running back Craig “Ironhead” Heyward.

With that said, let’s get to the obligatory highlight video.

Wooooo! I’m sure that told you a lot.

Heyward can make plays, but that’s because he’s an effort guy.

He doesn’t give up and often finds himself in the right place at the right time. Take a look at this clip from the from the 2010 Rose Bowl, where Ohio State played Oregon.

Heyward spends plenty of time disrupting plays and even when doesn’t, he gets his ass downfield to make the tackle.

Heyward has neither the burst or strength to be a big-time pass rusher. If he did, he’d be going in the top half of the first round.

Heyward was matched up against Wisconsin left tackle Gabe Carimi, who should go in the first 20 picks, when the Buckeyes played the Badgers in 2010.

Heyward had a couple flashes in the game, but we was largely dominated by Carimi.

What does all of it mean for the Packers? That’s for Ted Thompson to decide.

Check out our look at UCLA linebacker Akeem Ayers: The Good, The Bad And The Ugly and our full Packers Draft Preview.