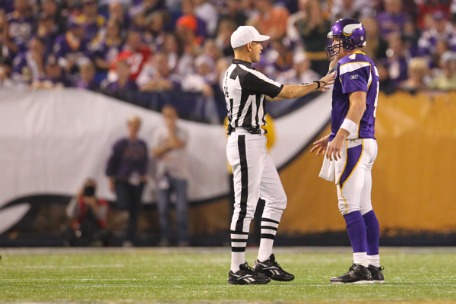 Ben Leber thinks Favre could do it again.

We haven’t speculated about [intlink id=”41″ type=”category”]Brett Favre[/intlink] coming out of retirement again and for good reason.

Favre maintained 2010 was his last season throughout the year and filed his retirement papers with the league once the season ended. Every indication is Brett Favre is retired from football.

Of course, this is Brett Favre we’re talking about. He’s come out of retirement three times.

We’re also talking about the [intlink id=”35″ type=”category”]Minnesota Vikings[/intlink], who are in need of a quarterback.

While it looks like they’re going to draft one early, the Vikings would be wise to have a veteran on hand while the rookie learns the ropes. And the Vikings are probably just delusional enough to think they can get one more season out of a 42-year-old Favre, despite the turd that his final season was.

Vikings linebacker Ben Leber was recently posed the question by PFT’s Mike Florio (way to create a story, bro!). If the NFL’s labor mess drags on and eliminates offseason programs and part of training camp, could Favre come out of retirement?

“That’s a good question. I don’t know. I’d like to think it’s going to benefit a guy like that, not to have to go through the offseason stuff and training camp — just the time on your legs and all that stuff. If there’s one guy that can do it, I certainly think he can do it.” Leber said. “If he wants to do it, I don’t know. That’s up to him. I think he’s proven that physically he can still do it and I don’t know how he does. I’d like to know his secret, but if that’s the case, I think people would love to have him on the team. We’ll see if he wants to come back.”

I also have a hard time believing Favre wants to get beat down again like he did last season, especially for a team that looks like it’s going nowhere.

Then again, this is Brett Favre and the Minnesota Vikings we’re talking about.

In the full interview, Leber discusses the labor situation, why the Vikings were a hot mess last season, and his future, in addition to Favre.