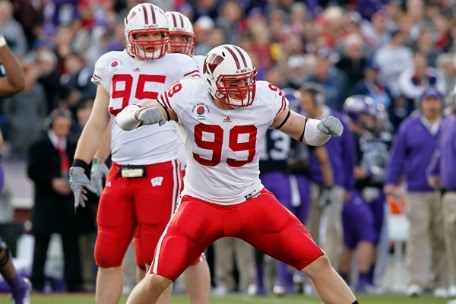 The Packers are interested in Watt, but they're not alone.

Watt, who played in the 4-3 in college, looks like he’ll be able to transition to a 3-4 defensive end in the pros.

Watt, who opted to stand on his numbers from the combine, went through a 15-minute position-specific workout in front of scouts. He was smooth and fluid in his movements, and shows surprising fluidity changing directions. His athleticism is impressive for a man of his size, and he certainly has the ability to play defensive end in a 3-4 or 4-3 base defensive scheme. Interestingly, high-level executives from a trio of 3-4 teams (San Diego Chargers, Pittsburgh Steelers and Green Bay Packers) paid close attention to his workout, so it is apparent that could be in play from the middle of the first round down on draft day.

Watt is 6-6 and 292, so he has the size to play either defense. However, he’s projected as a mid-first round pick, so he’s unlikely to be available when the Packers select at No. 32.