Now Naked Guys Are Cursing Jay Cutler Before Getting Arrested 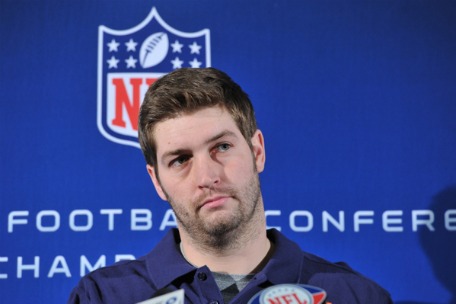 I guess that’s what happens when you give up during the NFC Championship game, spend the second half standing around on the sidelines looking stupid and then don’t say peep while everyone and his brother is trashing you in the media during the offseason.

A man who complained he was being ignored captured the attention of police recently not only by running naked through a restaurant parking lot in Kane County but by demanding to know about the dedication of Bears quarterback Jay Cutler.

A Kane County sheriff’s deputy reported that she spotted the man about 5:30 p.m. Feb. 19 at Sorrento’s restaurant on Illinois Route 64 in Maple Park.

The man was yelling obscenities and threats, according to the report, but he also interspersed his shouts with other topics.

“Do you think Jay Cutler gave up?” he reportedly shouted, in apparent reference to the quarterback sitting out about half of the NFC championship game with a knee injury.

The man was reportedly seeking attention after getting in an argument with a family member.

I guess he got it.

And so did our main man Jay Cutler.