Not Everyone Sold On Brooks Reed 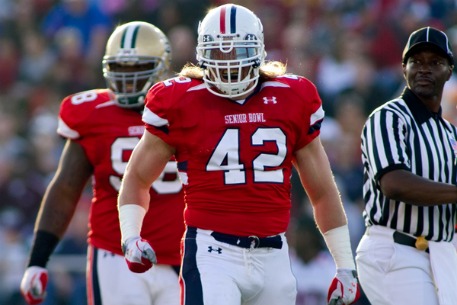 Reed would fill a need for the Packers, but...

Arizona linebacker Brooks Reed will be the newest member of the Green Bay Packers, if you believe every idiot with a mock draft.

It may not be unanimous, but Reed is the player most often associated with the Packers’ No. 32 pick. The team needs a pass-rushing, 3-4 outside linebacker and Reed fits the bill, but not everyone is sold on him.

Reed played well at Arizona, recording 47 tackles and 6.5 sacks his senior season — numbers that aren’t exactly eye popping. He boosted his draft stock tremendously after the season, though, with a strong combine and Senior Bowl performance. That alone seems to have moved him into the first-round conversation, which may be somewhat high according to Wes Bunting.

The biggest reason why I don’t consider Reed an upper echelon prospect and pass rusher is because of his lack of fluidity and change of direction skills off the edge. On tape when he does reach the corner he lacks the ability to drop his pad level and really flatten out on the corner, consistently allowing his pad level to remain high, and opposing blockers can easily push him past the QB. Thus, he makes a lot of his plays on the edge due to second effort.

Plus, on tape he never really changes directions as pass rusher. Reed is a linear guy who can be effective with his first step off the snap or when shooting the C-gap inside of the opposing tackle and will work a spin move off his rush. However, overall on tape I don’t see any resemblance of the ability to work a sudden up and under or inside out move in order to get his blocker off balance and then accelerate.

Thankfully, [intlink id=”20″ type=”category”]Ted Thompson[/intlink] and not some jerkoff at SB Nation will make the ultimate decision on Reed. While Ted will be looking for another pass rusher, he’s not going to reach for a guy in the first round if that guy doesn’t have the tools.

With Reed, it remains to be seen if the Packers are as high on him as everyone else.