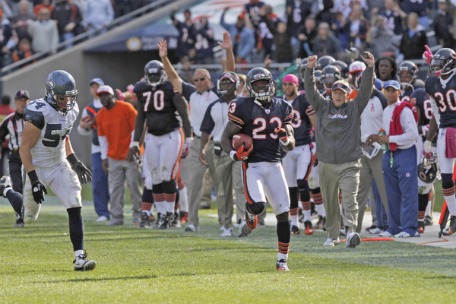 If the NFL wanted to eliminate what’s potentially one of the most exciting plays in football, they did a good job on Tuesday.

The league decided to move kickoffs from the 30 to the 35-yard line. You know what that means?

You’re only going to see touchbacks in the NFL, next season.

I’m probably overreacting a bit, but you’re certainly going to see a lot more touchbacks. Hell, the move probably helps the Packers. They haven’t been able to find a decent kick returner since Allen Rossum.

The move was made in the name of player safety, but could actually make it more dangerous for the return man, as we discussed on the forum.

The NFL actually altered the original idea slightly. Instead of moving touchbacks from the 20 to the 25, as was originally planned, they decided to leave well enough alone. They also allowed the two-man wedge, which would have been ruled illegal in the original proposal, and they adjusted running starts for coverage teams. Players on the coverage team can only get a five-yard running start now, as opposed to the 10 or 15-yard start they were allowed before.

Predictably, many of the league’s better returners were ticked.

“They’re going too far. They’re changing the whole fun of the game,” Chicago Bears return man Devin Hester said.” “Fans come out — especially in Chicago — to see returns. That’s one of the key assets to the team. Fans [like] our big returns. You take that out of the game, not only do they kick it out of bounds when it’s time to punt the ball, now you get the disadvantage on kickoffs. We felt we were guaranteed [a chance] on kickoff returns and now you’re taking that away, it’s like you’re taking the whole return game out of the picture.”

The league didn’t stop there, either. They also passed three other rule changes.

Booth replay officials will now have to confirm all scoring plays, which will invariably give you more time to buy and consume beer while you’re at the game.

The other two changes were minor. Teams will not be able to change the color of their field without league approval and dead ball fouls will not extend the half.

Previous Article
Kuhn Expects To Be Back With Packers
Next Article
Lovie Smith: Still An Idiot