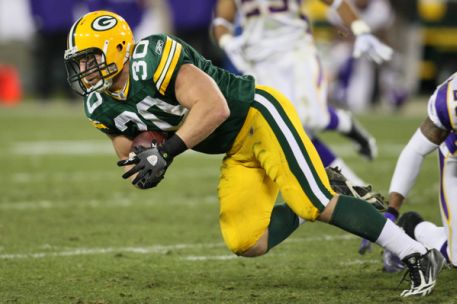 A lot of factors are working against Kuhn's return.

Kuhn’s agent says the Packers haven’t been in touch about a new contract and Kuhn could be an attractive option to a team looking for a lead blocker and power runner.

This is a big year for free-agent fullbacks, with John Kuhn and Baltimore’s Le’Ron McClain on the market. John Harbaugh said that the market may set McClain’s price pretty high, and Kuhn may also earn a premium from a team that wants a combination fullback/power back.

No one expects Kuhn to command as much as McClain, who gained 902 yards and averaged 3.9 per carry in 2008, but Kuhn certainly upped his value in 2010.

In addition to gaining a career-high 281 yards and scoring six touchdowns (four rushing, two receiving), Kuhn established himself as a reliable short-yardage back. In fact, he was the Packers only reliable short-yardage player before [intlink id=”1038″ type=”category”]James Starks[/intlink] emerged in the playoffs.

The Packers offense will change a bit in 2011, though.

The team still has [intlink id=”438″ type=”category”]Quinn Johnson[/intlink] as a holdover at fullback, but it looks like the role will be of diminishing importance.

Starks and the returning [intlink id=”64″ type=”category”]Ryan Grant[/intlink] will divide up the bulk of the carries and if both stay healthy, the Packers may even employ some two-back sets with both players on the field at the same time.

The return of [intlink id=”209″ type=”category”]Jermichael Finley[/intlink] changes things, too.

Everyone knows the Packers are a pass-first team and with Finley’s return, the team will be able to utilize their spread offense more effectively. That means one back and multiple receivers, in addition to the big tight end.

In other words, the fullback position could see even less playing time than it has in the past, which makes the return of Kuhn and Korey Hall, who’s also a free agent, less important.

Compounding Kuhn’s chances of re-signing with the Packers is Hall, who has three years of NFL service, will likely be a restricted free agent once a new collective bargaining agreement is signed. Kuhn has five years, which, under the current rules would also make him restricted, but under a new agreement likely will make him unrestricted.

When you add up all the factors, they’re not working in favor of John Kuhn’s return to the Packers.

Get it out now, one more time…