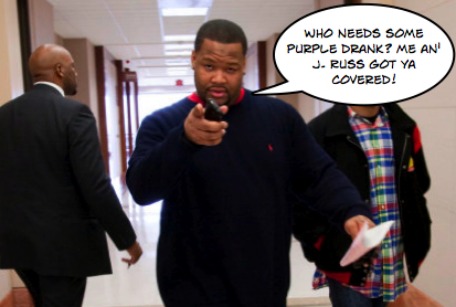 The good news is this.

The bad news is, he’s not any smarter than he used to be.

Jolly is working out in Houston with former Oakland Raiders quarterback JaMarcus Russell. That’s right, arguably the biggest draft bust of all time.

Why is this so bad?

Well, for starters, Russell only became such a monumental bust because he had absolutely no work ethic. Russell, who was rumored to have shown up near 300 lbs. for offseason activities and training camp on more than one occasion, lasted all of three seasons in the NFL after being the No. 1 overall pick in the 2007 draft.

Those wonderful habits are probably rubbing off on Jolly in some way.

Then there’s the minor detail that both players were arrested for possession of codeine in separate incidents, two years apart.

In case you’re not hip, codeine is used in a concoction invented in Houston called, among other things, purple drank, sizzurp or lean. It’s mixed with Sprite or Mountain Dew and Jolly Ranchers, and when people drink it, they lose their shit.

So here’s Jolly, awaiting trial for felony possession of codeine, trying to get reinstated by the NFL, hanging out with this clown. I’m not suggesting they’re concocting some elaborate scheme to distribute codeine, but would that really surprise anyone?

The NFL hasn’t made a decision on Jolly’s request for reinstatement and the judge presiding over his case has been monitoring Jolly’s behavior while he participates in a pretrial diversion program, with the hopes of having the felony counts dismissed.

Jolly may not be doing anything illegal, but when is that dumb bastard going to realize perception is often reality?

My guess is never.