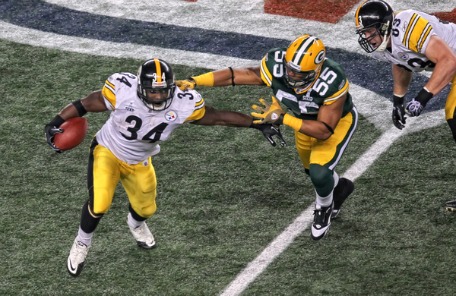 Bishop is the man in the middle.

“Correct,” McCarthy said. “Given the full opportunity to play, I thought Desmond had a heck of a year. You always saw it in spurts. He’s probably the most instinctive guy in the defensive front seven.”

Of course, a few things have to be worked out before the Hawk-Barnett competition begins. Namely, the Packers will have to renegotiate Hawk’s contract.

Hawk is a due a base salary of $10 million in 2011, an amount that’s guaranteed once the league year officially begins. Sources say negotiations with Hawk have gone nowhere, thus far, meaning the Packers would have to release him when the league year eventually begins, which won’t be until a new collective bargaining agreement is reached.

Barnett’s salary is also on the high end, especially if he ends up being a backup. He’s scheduled to make $5.5 million in 2011 and $6 million in 2012. Although there hasn’t been any indication the Packers would release Barnett, when you look at his recent production and injury history — he’s missed 19 games the last three seasons — it wouldn’t be surprising.

[intlink id=”79″ type=”category”]Brandon Chillar[/intlink], who joined Barnett on injured reserve last season, completes the group. The Packers signed Chillar to an extension during the 2009 season.

It will be interesting to see if the Packers pick up an inside linebacker in the draft. If they do, it’s a clear sign one of these guys could be on his way out.