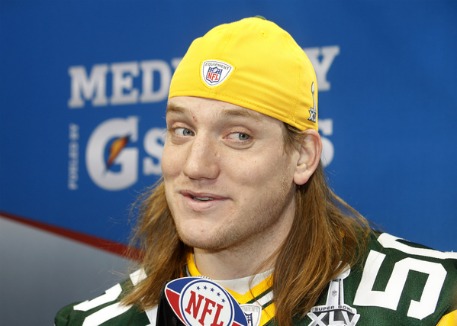 Hawk is about to be a Packer again.

A day after he was released, linebacker [intlink id=”80″ type=”category”]A.J. Hawk[/intlink] and the Green Bay Packers have the parameters of a new contract in place.

Hawk will reportedly sign the deal tonight before 11 p.m. CT, when either free agency or a lockout will begin. The 27-year-old will get a five-year deal.

Hawk was scheduled to make $10 million in the final year of his previous deal, which led to his release. The Packers had no intention of paying him that much money, even though they obviously wanted to keep him around.

By releasing Hawk yesterday, the Packers protected themselves against a potential salary cap hit. In the event the league and the NFLPA come to an agreement on a new labor deal, the league year will begin and Hawk’s $10 million salary would have been guaranteed if he were still on the team.

By releasing Hawk, the Packers also made it easier to construct a new deal. The team was able to avoid restructuring the $10 million from the final year of his previous contract and start fresh.

Hawk had probably his best season with the Packers in 2010, recording 111 tackles and three interceptions.