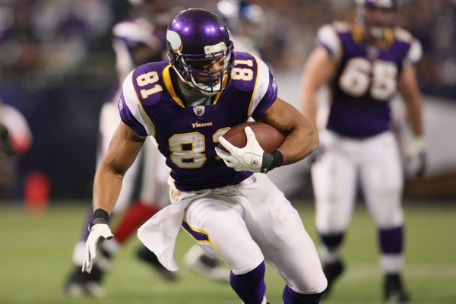 I’m sure you remember Minnesota Senator Amy Klobuchar, who had to pass the U.S. Senate resolution honoring the Green Bay Packers, and then had the gall to say the [intlink id=”35″ type=”category”]Minnesota Vikings[/intlink] will win the Super Bowl in 2012.

I mean, if there was ever a Senator with her head up her ass…

“I feel like the window is still open. It’s definitely getting smaller to me, before the rebuilding process [starts],” Shiancoe said. “We have so many veterans and elite players right now on our team. A roster full of great players. … Offensively, we have all the skill positions [filled]. It’s an offensive coordinator’s dream. Those are weapons that are definite mismatches if put in the right position.”

“It’s just rare to have a team full of the guys that we have,” he said. “A lot of veterans who are seasoned and ready. We’re built for the now.”

Let’s break this down.

You have all the skill positions filled?

At quarterback, which I believe is a skill position, there’s Joe Webb and…

Then there’s receiver, where there’s Percy Harvin and…

Ooooh, nothing. Sidney Rice is a free agent and after that there a bunch of slobs who couldn’t gain more than 500 yards last season with Favre throwing them the ball.

You’re set at exactly one skill position — running back, where Adrian Peterson is still one of the league’s best and Toby Gerhart is a capable backup.

I won’t even go into the leaky offensive line, the aging front four or the secondary that couldn’t cover anyone, last season.

But hey, let’s all shave our IQs in half and pretend we’re from Minnesota for a second.

This is our year!

Our time is now!