This Is How The Steelers Prepare For The Super Bowl 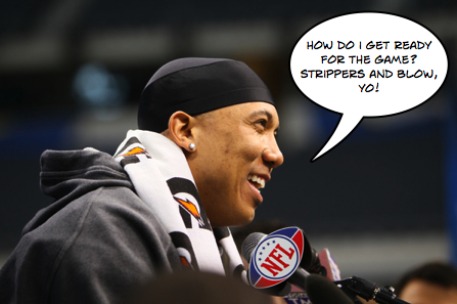 Hey, they’ve been in the Super Bowl a few times in recent years, so maybe the Pittsburgh Steelers don’t need to worry about the usual distractions.

Maybe they have their own way of preparing. I’m sure if quarterback Ben Roethlisberger wasn’t engaged, he’d be out boozing and trying to rape hook up with some local college girls.

I kid, of course, especially about the photo above — no one said anything about blow.

They did say something about strippers, though.

In what could be described as nothing more than Pulitzer-worthy investigative journalism, Gromer Jeffers Jr. of the Dallas Morning News was staking out local strip clubs on Monday night, looking for NFL players.

Lo and behold, what did he find?

Several members of the Pittsburgh Steelers, including receiver Hines Ward.

A number of other pro athletes were there as well.

When Ward and his teammates entered the club, dancers converged on them. They spent a few minutes in the VIP area at the back of the club. But as the music pumped and the women strode across the four stages, the Steelers huddled in the front corner of the club for closer looks.

Ward, wearing a plaid shirt and jeans, danced with a couple of strippers. At one point, he tossed out dollars while receiving lap dances. Other Steelers joined him.

At one point, near midnight, the Steelers, including huge linemen, appeared on the main stage. There they posed and danced with an assortment of strippers. It was “Make It Rain Monday” at the club. And some of the players made it rain with their dollar bills.

The club’s DJ announced several members of the Green Bay Packers were on their way, but none showed up, Jeffers reported.

Something tells me if Mike McCarthy caught wind of any of his guys going to a strip club during Super Bowl week, they’d be in deep shit.

But hell, the Steelers have experience in the big game, so they’ve obviously got this routine down.

Don’t be surprised when James Harrison pulls a Eugene Robinson on Saturday night.

Previous Article
Everyone Is Rejecting The NFLPA Ad, So We’ll Play It
Next Article
Packers Want Favre Back In The Family