Seven Questions (And Answers) About The Pittsburgh Steelers 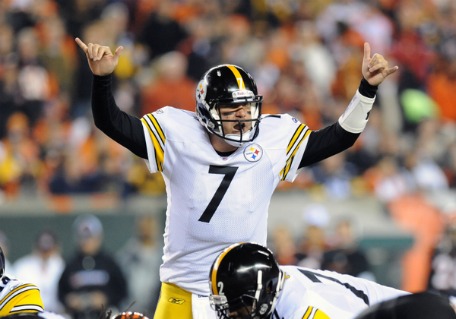 Stopping this clown is key for the Packers.

In case you haven’t heard, the Green Bay Packers are playing the Pittsburgh Steelers this Sunday.

As such, I thought it would be a good idea to trade a little info on our respective teams with Chris at Nice Pick, Cowher, one of the best Steelers blogs we’ve seen.

And yes, I chose seven questions because, you know, this year could have been the Steelers’ seventh Super Bowl championship.

Without further ado, here’s what you need to know about the Pittsburgh Steelers.

The Packers offense is phenomenal indoors. How do the Steelers slow the Packers speed and passing attack?
Oh, I believe you that the Pack has great offensive production indoors — facing weak defenses like Detroit or Minnesota probably has a little something to do with that.

The Steelers have a lot of speed on defense. Ike Taylor is one of the most underrated corners in the league. He’s a shutdown corner in almost every way, except when it comes to making interceptions. But hey, that’s why he’s a cornerback and not a receiver.

Linebacker Lawrence Timmons is one of the fastest ‘backers in football and can run with most tight ends and many slot receivers. And of course, there’s Troy Polamalu, who had two weeks to rest up for the biggest game of his life. While the Steelers pass defense is maligned, I don’t think it’s as a weak as some might suggest.

Naturally, though, the best defense is an offensive defense. Attacking Aaron Rodgers will be key. Hit him, rough him up, and disrupt his rhythm. If he’s allowed to just stand back there unmolested, I have no doubt he’s capable of picking anybody apart.

Is Pittsburgh a different team without Maurkice Pouncey? Will they be able to run the ball as effectively if he doesn’t play?
The New York Jets have a top-five ranked run defense. Pouncey left the game after the first series of the game. Rashard Mendenhall nonetheless had nearly 100 yards at halftime with Doug Legursky playing center. Legursky is a natural center who is pretty adept at run blocking. Pouncey’s great strength is pulling and getting to the second level, so breaking big runs got harder with him out, but the Steelers should still be able to run the ball with some level of efficiency.

Speaking of the Steelers offensive line, it looks like the weakest area on the team. How will they handle the Packers multiple blitz packages?
The biggest disadvantage to losing Pouncey will be in the passing game. Pouncey is great at recognizing defensive shifts and calling out blocking assignments/blitz pick-ups. That’s where his absence will likely be noticed most, especially with Dom Capers’ tricky blitzing schemes. Heath Miller is one of the best blocking tight ends in football, while both Mewelde Moore and Mendenhall have demonstrated ability at blitz pick-ups. It’s a huge blow to keep Miller in to block because he’s one of Ben Roethlisberger’s favorite targets, but the Steelers will have some max protect schemes in place for just this purpose.

Is there any chance the Super Bowl turns into a shootout like the last time the Packers and Steelers met?
I think there’s a pretty good chance of that happening. Both teams run a similar defense, so both offenses have the experience of seeing that defense every day at practice. On the other hand, both these defenses are worlds better than when they met last year. So I guess the answer is anybody predicting one type of game over the other is foolish. In my opinion, the odds of a shootout are just as likely as a tight, low-scoring affair.

Does experience play a role in the game or do you throw that out the window?
When Ben, in his second year as a starter, played in Super Bowl XL, he was totally overwhelmed and played a horrible game. Going back a ways, the Steelers appeared in Super Bowl XXX against a Cowboys team in the midst of their 90’s dynasty. The Steelers played tentative and nervous for almost a full half before getting their legs under them, but it was a little too late to make a difference. Our previous Super Bowl opponent, the Arizona Cardinals, had no experience as a team, but their quarterback, Kurt Warner, was a veteran of the big game. I think for teams in general, it’s a factor, but they can get over it fairly quickly. For a quarterback, it’s a far bigger deal.

Who is the key player for the Steelers and what must he do for them to win?
Big Ben. He has to make one or two of the big plays only he can make. The Steelers have a lot of players on defense capable of making something happen. Likewise, they have a number of skill players on offense who can do something when their number is called. For example, Antonio Brown, who caught a 50-yard bomb in the Ravens’ game, only had a handful of catches all season.

It comes down to Ben, though. Roethlisberger is the key. He had a crap game, statistically, against the Jets, but the three or four pivotal offensive plays of the game were things only he could pull out of hat. He makes the big plays when they need to be made and the Steelers win. It’s that simple.

Finally, give me a prediction and a quick summary of the game.
27-24 Steelers (duh). I think the Steelers get off to a lead thanks to the Packers nervousness and inexperience, then hold on while Rodgers ignites a second-half rally. Ben will make a throw toward the end of the game which proves to be the dagger and the Steelers walk away with their seventh Lombardi Trophy.

If you’d like to see Chris’ seven questions for me and my spot-on analysis, you can check out Stairway To Seven Runs Through Lombardi Avenue at Nice Pick, Cowher.

Previous Article
A Little More Green And Yellow, Now Featuring Lil Wayne
Next Article
While Roethlisberger Is Out Boozing, Rodgers Is Watching Film