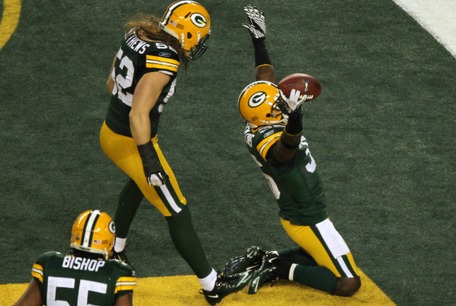 In a fitting end to a season marked by adversity, the Green Bay Packers overcame another spate of injuries to key players and outlasted the Pittsburgh Steelers 31-25 to win Super Bowl XLV and bring the Lombardi trophy home.

It was an amazing game from the start.

The Packers dominated the first half, scoring two times in 24 seconds off Steelers turnovers to take a 21-10 lead at the half. Ben Roethlisberger looked lost and the Steelers defense was on its heels most of the time as Super Bowl MVP Aaron Rodgers sliced through defenders and tossed two of his three touchdowns to Jordy Nelson (stud of the game) and Greg Jennings.

Green Bay’s defense also came up big with two picks of Roethlisberger, one returned for a touchdown by Nick Collins.

But Pittsburgh didn’t back down, and barreled back starting at the end of the second quarter with a Roethlisberger touchdown pass to Hines Ward.

Rashard Mendenhall then scored on a drive dominated by rushing plays early in the second half to put Pittsburgh within 4. Green Bay roared back, despite a few dropped passes and big penalties, going up by 11 again when Rodgers connected with Jennings for the second time after a Mendenhall fumble.

Another Roethlisberger touchdown and a ballsy two-point conversion again pulled the Steelers to within 3.

Rodgers then made arguably the play of the game with a 31-yard toss to Jennings on 3rd-and-10 to keep the Packers’ drive alive and set up a field goal, putting Green Bay up by 6 with less than two minutes remaining.

Needing to go 87 yards with one timeout left, the Steelers couldn’t make it across midfield. The Packers took over and celebrations on the Green Bay sideline began.

Rodgers was magnificent, going 24-of-39 for 304 yards, three touchdowns and no interceptions for a 111.5 percent passer rating. The running game was spotty, but got the job done when yardage was needed.

The defense? Stellar yet again despite the loss of leader Charles Woodson to a broken collarbone. The tackling was incredible. No one could break away most of the game, and Clay Matthews forced a key Mendenhall fumble in the third quarter with another one of his trademark, bruising hits.

Yes, passes were dropped. Yes, penalties were committed. And no, they weren’t perfect.

But this was a season marked by overcoming adversity, and it’s only fitting that the Packers won their first Super Bowl title in 14 years doing the same on Sunday.

What a great effort. Congratulations, guys.

Previous Article
Walden Looks Like A Long Shot
Next Article
And We’re Back!