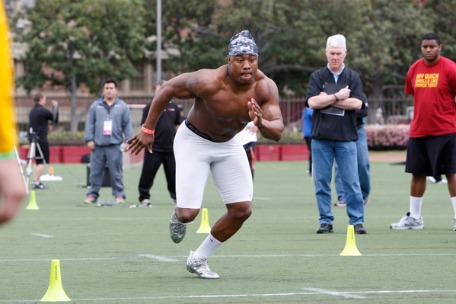 This may be what Griffen looked like on Monday.

In just one season on the team, defensive end Everson Griffen has learned the Minnesota Vikings way.

That is, be a complete embarrassment to yourself and the NFL like so many great Minnesota Vikings before you. Represent the Minnesota Vikings like they deserve to be represented. Conjure memories of idiots like Favre, McKinnie, Culpepper and Onterrio Smith.

Griffen joined that elite group of fuck ups over the last few days when he was arrested not once, but twice… and Tasered.

On Friday, Griffen was arrested in Los Angeles for allegedly being drunk in public. He was released on Saturday.

Then, he was pulled over on Monday and found to have an invalid license. This is where it gets weird.

Griffen then told them “he did not want to go back to jail” and sprinted away from the officers, who caught up with him after a short distance.

The Minnesota Vikings, always the picture of class — home of the cock texter, a guy who got kicked off the Pro Bowl team, the love boat and the Whizzinator.

I think we need a catchy name for Griffen or perhaps the incident itself. Please leave your suggestions in the comments.