Vick At 75 Percent, Will Play 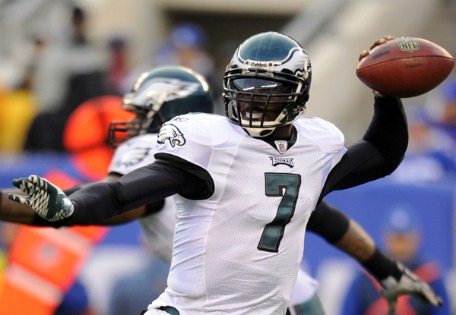 Vick may not be at full strength this weekend.

Philadelphia Eagles quarterback Michael Vick still isn’t at full strength after suffering a quad injury in his team’s week 16 loss to the Minnesota Vikings, but still plans to play against the Green Bay Packers, Sunday.

“That’ll never happen,” Vick said, when asked about the possibility of missing the game. “Regardless of what the situation is, I’m gonna make sure I’m there for my team. . . . I’m pretty confident that I’ll be able to go out there and play.”

Vick claims he’s currently at 75 percent, but felt he was at 50 percent on Sunday, so he’s apparently making a rapid recovery.

Philadelphia enters the playoffs on a two-game losing streak. In addition to dropping the game against Minnesota, they also lost 14-13 to Dallas in week 17.

Backup quarterback Kevin Kolb started that game and was an unimpressive 18-of-36 for 162 yards, one touchdown and three interceptions. He was sacked six times and lost a fumble.

Kolb was the Eagles starter at the beginning of the season, but suffered a concussion against the Packers in the season’s opening week, which ultimately led to Vick taking his job.