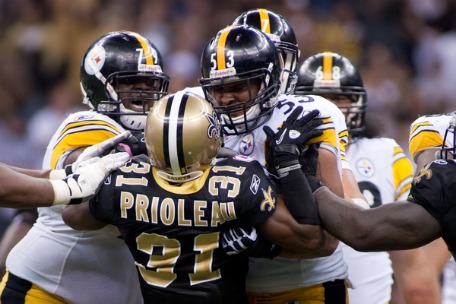 Pouncey is a bad mofo.

Pouncey has been fitted for a cast, after suffering what was believed to be a high-ankle sprain in the AFC Championship game. Pouncey didn’t return after suffering the injury, but suggested after the game he’d play in the Super Bowl. The cast is a good sign that isn’t going to happen.

The news is good for the Green Bay Packers and bad for the Steelers. Pouncey was probably the Steelers best offensive lineman, this season.

Doug Legursky will replace Pouncey in the lineup.

Legursky managed to hold things together against the Jets, but, as Pro Football Weekly notes, the Steelers totaled only 56 yards in the second half and didn’t run the ball as effectively with Pouncey on the sideline.