Let’s All Cringe And Then Make Fun Of Freddie Mitchell 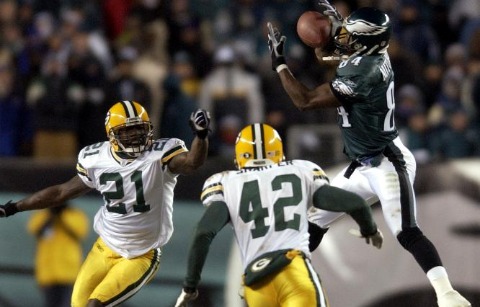 Freddie Mitchell is the man!

It’s one of those things that sits in the back of your mind that you don’t want to remember.

And then someone brings it up and you can’t help but think about what could have been.

The Green Bay Packers are playing the Philadelphia Eagles this week. You know the play I’m talking about.

It’s so infamous in Packer lore it has a name.

If a certain rookie linebacker would have dropped back to the depth he was supposed to, the Philadelphia Eagles may never have gone to the Super Bowl in 2004. We might be talking about something else entirely. We may have never heard of a play called 4th and 26.

But that’s not the case. Is it, Nick Barnett?

It’s one of the most painful moments in Packers playoff history and it happened almost seven years ago.

What’s funny about it is the guy who caught that fateful pass — former first-round draft pick Freddie Mitchell — was asked to recount the play by Philadelphia Sports Daily.

Here are some excerpts.

I had to take a certain angle that most young receivers wouldn’t have taken. Any other angle and it would have been a bum play. I was the master of finding holes, and I knew right where the hole would be. It was money.

Yes Freddie, you are money and you certainly are of a higher caliber than any other rookie receiver, ever.

First of all Donovan’s pass was behind me and it was wobbly, but I had to take advantage of the opportunity that was presented to me. Right when I caught the pill, I kind of knew I had the yardage right away. I looked at the sticks and to see where I was at and I knew I got it. I felt like Michael Jordan hitting a last-second shot or Tiger Woods sinking a 50-foot putt.

You are certainly on the same level as Michael Jordan and Tiger Woods, Freddie. When they talk about all-time greats, they say names like Babe… Wayne… Michael… Tiger… Freddie.

I love being a part of that play. A lot of great receivers came through this league, but I’d rather have one memorable catch than go to the Pro Bowl. There are Pro Bowl and Hall of Fame players that have caught 20 times as many passes as me but aren’t remembered.

Let’s see… no, I can’t even go there. I’d be going on and on about catches that Hall of Famers like Lynn Swann, Steve Largent, Jerry Rice and James Lofton made, and we don’t want to do that.

It’s more important that Freddie Mitchell made this particular catch than ever went to a Pro Bowl, much less the Hall of Fame.

Mitchell finished his four-year NFL career with 90 receptions for 1,263 yards and five touchdowns.

His greatest claim to fame is that he’s an answer to a trivia question.

But don’t tell Freddie Mitchell that.