Here’s One Reason To Be Optimistic About Sunday 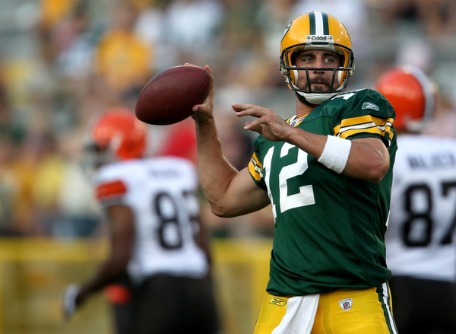 Rodgers is good, but he's even better indoors.

We haven’t talked a lot about the Pittsburgh Steelers, particularly in a negative light.

That’s because the Pittsburgh Steelers scare me. More than the Philadelphia Eagles, more than the Atlanta Falcons and certainly more than the Chicago Bears. Coming into the playoffs, I thought there were two teams who could give the Green Bay Packers trouble — the Steelers and the New England Patriots.

That being said, I thought the Patriots defense, or lack thereof, would catch up with them before the Super Bowl, and I was right. It was a cautious optimism, but this Super Bowl matchup is not unexpected.

Pittsburgh is scary for several reasons — a great defense, solid coaching, big-game experience and a quarterback who’s a proven winner.

It’s hard not to like the Packers chances, though, especially considering they’ll be playing in prime conditions for their offense — indoors. Although Cowboys Stadium has a retractable roof, it will be closed on Sunday and that’s good news for the Packers.

Aaron Rodgers and company are next to unstoppable indoors.

The Packers have averaged 31.8 points in the 12 games they’ve played indoors since Rodgers has been the starter. In their two indoor postseason games, they’ve scored 45 (Arizona in 2010) and 48 points (Atlanta, this year).

Rodgers has put up 26 touchdowns, five interceptions and a 111.1 rating in his 12 indoor games. Receiver Greg Jennings has recorded more than 100 yards in seven of those 12 games.

The Packers offense will face probably it’s toughest indoor test to date against the Steelers defense, which is averaging a playoff-best 207 yards per game, but you have to at least be optimistic about their chances.

Previous Article
Jeremy Piven Does Not Like Your Super Bowl Matchup
Next Article
Where Would The Packers Be Without A.J. Hawk?