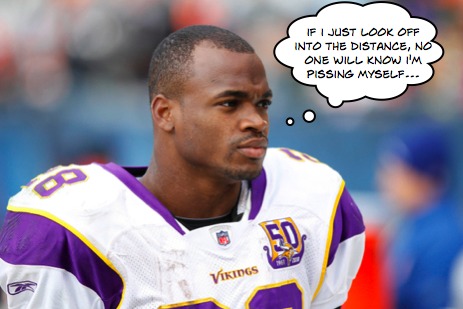 Apparently, Peterson and his little girl bladder had to piss so badly he stood outside a McDonald’s drive-thru at 3 a.m. and asked to be let into the store. The assistant manager, who was working this god-awful shift complied, because, well, Adrian Peterson fucking asked.

While the drive-thru was open for all the drunks roving around the Twin Cities killing people, the dining room was not, so, McDonald’s, being the upstanding operation they are, canned the woman for breaking the rules.

“He’s a public figure… I know him better than some of the maintenance people that come in and out,” she explained. “I never thought in a million years that that decision was going to cost me my career.”

Anyway, the woman, who had been working at McDonald’s for seven years, tried to reach out to Peterson to help her get her job back. Peterson scoffed at her stupid request and didn’t bother to pay it any attention.

Of course, once the local media got a hold of the story, the idiots who are fattening up our children like they’re pigs being lead to slaughter, had no choice but to give the woman her job back.

So, at least there’s that.

Let this be a lesson to all of you.

Never trust a Minnesota Viking and never, ever, under any circumstance help one because they will only spit on you and your pithy existence.

Jackson Is As Good As Gone