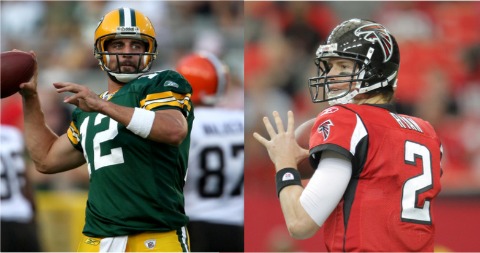 There’s good reason for such nonsense — they’re both young, they’ve both been called the next so-and-so, they’ve both enjoyed success early in their career, etc.

In fact, if you take a look at the stats, they’re pretty identical, too.

Take this season, for instance.

Rodgers is two years older, but both quarterbacks have been full-time starters for three years. Rodgers, of course, sat behind some guy loser named Brett Favre for three years, while Ryan started immediately as a rookie.

Both Rodgers and Ryan have made the playoffs twice — Rodgers is 1-1 and Ryan is 0-1.

Their career stats are similar, as well.

Okay, if you look closely, they’re not all that similar.

Let us count the ways Aaron Rodgers is the superior quarterback. As a favor to our friends in Atlanta, I won’t even get into the personality debate, because we all know who’d win that contest hands down.

3. Yards per pass — Rodgers is a full yard better, which speaks both to the nature of Atlanta’s dink and dunk offense and the fact Rodgers is one of the best downfield passers in the NFL.

5. Clutch situations — Throw records and everything else out the window. Ask yourself, if you had one drive to save your life, who would you rather have behind center? I’ll take Aaron Rodgers, every time.

Jones May Not Be Back

Jones May Not Be Back