So, Now Sterger May Go Public 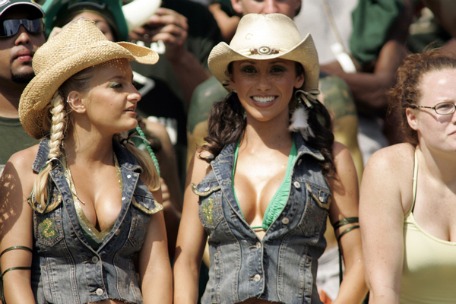 You’d think the NFL would have brought this whole Brett Favre cock texting thing to a conclusion by now.

Nope. The league seems content to let it drag on as long as possible. They may as well just let it drag on through the end of the season, so they won’t have to take any action at all against their golden boy, Favre.

While the NFL is dicking around, the tart at the center of it all, Jenn Sterger, has decided she just might go public with all the information she supplied to the league.

Sterger’s manager, Phil Reese, believes she “provided extensive evidence that irrefutably proves there was harassment” — and adds, “No matter what happens Jenn has all legal remedies, including going public … if the NFL doesn’t clear her name.”

That’s swell. We always knew the league would be reluctant to do anything to Favre. He’s good for ratings and therefore, good for the NFL’s pockets.

What I don’t quite understand are the legal remedies Sterger has and how going public is one of those. Sterger hasn’t been accused of anything, so her name really doesn’t have to be cleared, as far as I know. Going public, then, would only serve one purpose — embarrass Favre.

It seems like that threat is again being used to try to pry some hush money out of the old cockslinger.

What’s unfortunate in this whole thing, is the league doesn’t seem to have a serious interest in doing anything if there was indeed some impropriety committed.

Previous Article
Jenkins Out This Week, Maybe Longer
Next Article
Whatever Happened To Brandon Underwood?