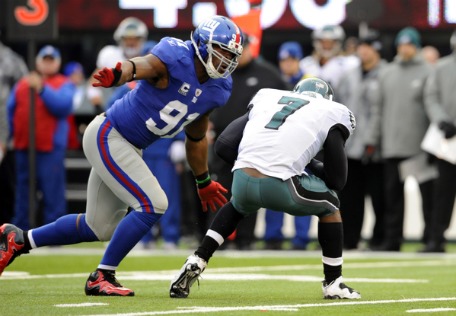 Steffen: Many are expecting the New York Giants to fall apart this week after a humiliating defeat at the hands of Michael Vick and the Philadelphia Eagles in week 15. I don’t see it playing out that way. The Giants are a veteran team and they have a lot to play for.

This is essentially a playoff game for both teams and I think it’s much more likely the Packers and Giants will make it a close game, which could spell trouble for Green Bay.

If there was ever a moral victory for Green Bay, it happened last week against the New England Patriots. Minus Aaron Rodgers, the Packers far exceded expectations. Led by the more poised and accurate than advertised Matt Flynn, the Packers unleashed a balanced offensive attack and dominated the heavily favored Patriots, one of the best teams in the league.

In the end, they were undone by poor clock management and (again) special teams breakdowns. These areas absolutely have to improve if Green Bay expects to do anything in the playoffs.

Aaron Rodgers must feel some pressure has been lifted off his shoulders. Against the Patriots, his teammates proved they can compete without him. I think this will allow him to settle into the offense and trust his teammates to make plays.

As I mentioned, this will be another close game, but the Pack will have their eyes on the prize and will finally emerge victorious in another game decided by four points or less.

Shawn: For a regular season game, it doesn’t get any bigger than this. I believe both of these teams are among the five best teams in the NFC, and both are capable of making the Super Bowl if they go on a roll in the playoffs. However, only one team will likely make the playoffs, and it will be decided by this game.

Offense — wash. If this game was in a dome, then the edge would go to the Packers’ offense, but with it being played on grass, outdoors, in 20-degree weather, it’s a tie at best for the Packers. The Giants clearly have the better running game, and they love to attack the edge, which is where the Packers have been soft all season. However, I believe the Packers’ running game can be a factor. The Giants’ defensive line loves to get up field, and Brandon Jackson is an ideal back to attack that. The big variables here are Aaron Rodgers, coming off an inactive week, and the Giants’ wide receivers. It’s a totally different unit than the one that excelled in the cold at Lambeau in the 2007 NFC Championship game. The receivers who best overcomes the conditions might make the difference in the game.

Defense — Packers. This is a close one, but I have to give the Packer defense the edge. The conditions and the field will help slow the Giants’ pass rush, which is their greatest weapon. The Packers D is better in the secondary, and if both teams struggle to get to the quarterback, it will be a big advantage for the Packers. The difference may very well be the Pack’s run defense at the edges. The Giants can control the game if they can consistently run it. Charles Woodson will be key in stopping the outside runs. The Packers need a big-time game from him. Lastly, the Packers absolutely have to get turnovers when opportunities present themselves. Eli Manning was excellent through three quarters against Philly, but is prone to throwing picks. The Packers need to catch the ball if it’s thrown their way.

Special teams — wash. Believe it or not, the Giants are about as bad on special teams as the Packers. The Giants, like everyone else, are better than the Packers in coverage, but the Packers have better returners. The kicking battle is pretty much even. The Giants have been iffy at kicker most of the season, and their punter is a rookie who is unlikely to have faced the conditions in Lambeau.

Intangibles — Packers. A lot of people want to give the Giants the edge here because they should be angry after their collapse last week. That anger, however, can work against them. The Giants certainly should be fired up at the start of the game and being on the road will actually help that “us versus the world” mentality the Giants seem to thrive on, but the memory of the collapse has to lurk in their minds and erode their confidence. In other words, if the Packers can get ahead and lean on the Giants, they might fall apart like they did at the end of last season. Also, it might be harder for the Giants offense to remain patient, even with a lead, remembering how big of a lead they gave up last week.

The Packers have lost two consecutive close road games and are back home with their starting QB back. They certainly feel they’re one of the better teams in the league, but know all the talk is meaningless if they lose this game and miss the playoffs. The Packers will be just as ready for this game as the Giants.

Experience goes to the Giants.

The two biggest intangibles in this game go to the Packers. One is home field advantage. Yes, Eli Manning and the Giants have already proven they can play well at Lambeau in the cold. However, playing at home usually gives the home team a break or two, and that could make a huge difference in this game. Lastly, there’s the fact the Packers HAVE to win this game. Lose, and they are out of the playoffs. The Giants could still make the playoffs if they win in week 17 and the Packers lose to the Bears. Yes, the Giants would certainly prefer to seal the deal by winning this game, but they don’t absolutely HAVE to win, and that has to make a difference.

This is a tough, tough game. Packers by 10 if they had Grant, Finley and Jenkins, but all three are out. Nick Collins is beat up and Frank Zombo is out. How many injuries can this team overcome? Frankly, they’re probably too injured to win this game against a top NFC team, but they are at home and it is the biggest game in Rodgers’ career. Somehow, I have to believe the Packers will get it done.

Sarah: The stakes couldn’t be higher in this game, and the Giants are dangerous coming off an epic collapse last weekend against the Philadelphia Eagles.

New York can clinch an NFC Wild Card berth with a win, while the Packers must win to keep their playoff hopes alive.

“(The stakes are) clear as a bell,” Giants coach Tom Coughlin said. “In this day and age, everyone is aware of exactly what is at stake, so it’s very honest and very straightforward to express that and make players aware of it.”

This is what December football should be, and Sunday’s contest at Lambeau promises not to disappoint.

While Matt Flynn filled in admirably against the Patriots, Green Bay is breathing a sigh of relief to get starting quarterback Aaron Rodgers back following his second concussion of the season.

He’ll be the key to dicing up the Giants’ secondary and getting Green Bay’s offense on track.

Both teams are stellar on defense, ranking first and second in the NFC in sacks, with 42 by New York and 40 by Green Bay. Packers linebacker Clay Matthews leads the conference with 12.5, while the Giants’ Justin Tuck and Osi Umenyiora are the only teammates with 10 apiece.

This is the first meeting between these teams since New York won 23-20 in overtime at Lambeau three seasons ago in the NFC championship, Brett Favre’s final game with the Packers.

The Packers have won nine of their last 10 at home. All six of their losses have been by four points or fewer.

This is going to be another great game, and I think this time, we’ll prevail.

Monty: Mike McCarthy is a great offensive coordinator. He’s not much of a head coach, though.

I have nightmares of him getting outcoached by the Giants Tom Coughlin in the 2007 NFC Championship game. Fortunately, the Packers don’t have some interception-tossing douche playing quarterback this time around.

Aaron Rodgers and Charles Woodson will not let the Packers lose this game, even though McCarthy will do his best to fuck it up.