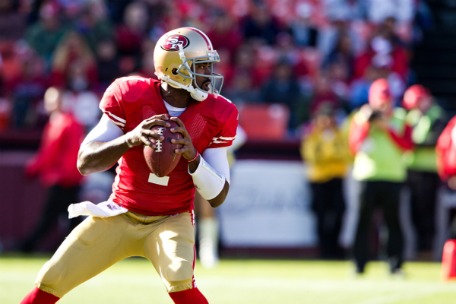 Smith gives the 49ers an athlete at quarterback.

Shawn: The San Francisco 49ers are still in contention to win their pathetic division, and they are coming off probably their best game of the season. So, they will at least start this game with the belief that they can play with the Green Bay Packers. It will be up to the Packers to dispel that belief, and the earlier in the game the better. If the 49ers can get into the fourth quarter with a reason to believe they can win, then it’s anybody’s game, and we know how well the Packers have finished off games this season.

Another factor that may or may not help the 49ers is the weather. For those in more blessed parts of the country who may be unaware, it is cold in Green Bay — in the 20s. If a little wind is added, it becomes a factor that could slow down the Green Bay passing attack, which is where the Packers have the most obvious advantage.

Don’t expect a new found commitment to the run in this game. San Francisco is eighth in the league against the run, and they are strongest up the middle.

A loss in this game would change the complexion of the Packers’ season, changing what appears to be an inevitable ticket to the playoffs into a season on the brink. So, in a way, a win is just as important to the Packers as it is to the 49ers. Plus, frankly, in the NFC West, would one more loss put the 49ers out of it? No.

To win this game, the Packers need to do one thing: play well. They are the better team in all three phases of the game. If they play like that, they should win this game by two scores. If whatever infected Daryn Colledge, Scott Wells, and Nick Collins last week catches on with more players this week, the Packers could very well lose.

This is a game that the Packers’ defense should be able to control. Though surprisingly capable, running back Brian Westbrook will not break the tackles that Michael Turner and Jason Snelling did against the Packers, last week. The Packers should be able to bottle up the running game and put the game in quarterback Troy Smith’s hands. From there, I expect Dom Capers to do what he usually does against young quarterbacks, confuse and confound them, and a return to MVP form from Clay Matthews wouldn’t hurt.

I have no idea what the Packers’ offense will do. It depends on the weather, the dubious question if they can establish any running game at all, and as always, the play of Aaron Rodgers. However, if the Packers simply hang onto the football, I believe they’ll make enough plays to pull away by the third quarter, at the latest.

Sarah: Green Bay should easily be able to erase the sour taste of last weekend’s loss at Atlanta when the team faces the San Francisco 49ers at home on Sunday.

The 49ers are coming into the game with a 1-4 road record, and will be without star running back Frank Gore.

The 49ers also have the second-worst scoring offense in the NFL this season, while the Packers have the best scoring defense and Aaron Rodgers has been lighting it up lately. He went from an 80.1 passer rating in October to a 130.2 passer rating this past month.

Rodgers was also Green Bay’s leading rusher in last week’s loss at Atlanta, which says a lot, given he only ran for 55 yards.

Nearly three months after losing Ryan Grant for the season, the Packers still can’t run the ball, but that shouldn’t be a problem against a porous 49ers defense that isn’t likely to give Rodgers many problems. The Packers have outscored their opponents 269-166 this season — the largest point differential in the NFL through Week 12 — and are averaging 24.5 points per game.

49ers quarterback Troy Smith has led San Francisco to three wins in four starts in place of Alex Smith, and veteran running back Brian Westbrook is giving the offense a bit of a spark in place of Gore, but it won’t be enough to overcome the confines of Lambeau Field.

Steffen: I’m taking a different approach this week and starting off with my prediction. The Green Bay Packers will win (and must win) 34-13.

Not only did I lead off with the prediction, but I’m actually predicting a victory for once.

The San Francisco 49ers blow. They have no business even being 4-7 let alone still technically in contention for their division.

Why am I so sure that the Packers will win?

1. Despite another alarmingly futile showing by the run offense, Aaron Rodgers is coming off another terrific game and will be eager to show San Francisco (again) that they made a big mistake selecting Alex Smith instead of him.

2. Mike Singletary is a fraud. I smelled an impostor last season and he has only proven me right. He is emotionally unstable and has shown horrible judgment and leadership over the last two seasons. Plus, he’s a former Chicago Bear. For the sake of the fans in San Francisco, he had better not be around next season.

3. Talent. Green Bay simply has a lot more. Frank Gore is the only player on the 49ers squad that I admire and he’s just gone on injured reserve with a hip injury.

4. Home game. It’s time for Lambeau Field to regain some of it’s intimidating mystique. What better time to do that than December?

5. Alt uniforms! Mark my words — you will hear a lot of the macho NFL commentators squirming in their seats and bashing the Packers throwback uniforms, which will make their one and only appearance this week. In my opinion, it’s a knee-jerk reaction rooted in homophobia. That’s for another post. Anyway, the Packers will be rocking their throwback (way back, like 1929 way back) brown, gold and navy uniforms this week. I think they look fantastic. Whether you like them or not, teams always seem to get a boost when they roll out a throwback set. Here’s hoping the Packers get a little boost.

It will be interesting to see how the Packers running game and special teams respond to a week of intense scrutiny and criticism. Will Mike McCarthy stay the course or will Brandon Jackson get 30-plus carries?

Green Bay can lose if they let 49ers quarterback Troy Smith make some big plays. He’s relatively raw still and Capers’ 3-4 should fool him into some turnovers, but he possesses the athletic ability to extend broken plays. If the Packers contain him, they will have the 49ers beat.

Monty: The San Francisco 49ers are a joke, but not as big of a joke as their coach, Mike Singletary. Nice giant wooden cross around your neck, douche. How’s that helping your win-loss record?