Packers In Trouble At Linebacker, Too 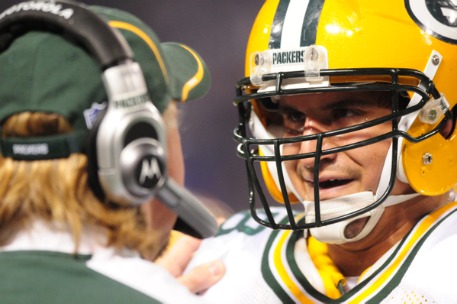 Rub some dirt on it and get back in there!

While everyone in the great state of Wisconsin is concerned about Green Bay Packers quarterback Aaron Rodgers and his availability for Sunday’s game after suffering his second concussion of the season, his status will be up in the air as he undergoes tests throughout the week.

The injury news isn’t getting any better for the Packers, though.

While Zombo hasn’t been setting the world on fire, the rookie has made the occasional play, notching four sacks and forcing two fumbles, this season.

The real concern is who will take Zombo’s place.

The Packers current backups at outside linebacker are Erik Walden and Diyral Briggs, both of whom were picked up off the street in late October.

Walden, who has only played special teams during his four-year career, was cut by the Dolphins and Briggs, in his second year, was released by the Broncos.

That doesn’t bode well for the Packers when they’re about to face Tom Brady, who’s thrown 10 touchdowns and directed an offense that’s averaged 42 points the last three weeks.

Compounding the problem, is defensive end Cullen Jenkins, who also plays the right side, will be out with a calf strain.

The Packers are going to be hard pressed to generate a pass rush against Brady and the Patriots, which could be disastrous.