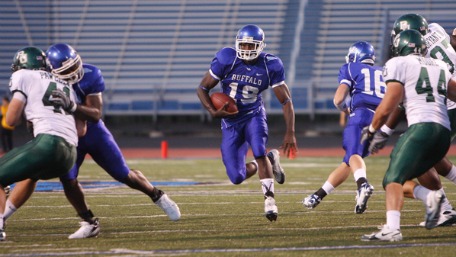 Starks is a mystery thus far.

Green Bay Packers rookie running back James Starks looks likely to see his first action of the season on Sunday.

Although Dmitri Nance has served as Brandon Jackson’s primary backup the past few games, both he and Starks suggested it would be the rookie sixth-round pick who will serve as Jackson’s relief this week.

“I should be playing, from what I know, special teams and everything. I should be good to go,” Starks said after practice Friday. “I’m excited. I can’t wait.”

If that is the case, the Packers game against the San Francisco 49ers will be Starks’ first game action since his junior year at Buffalo, which was 2008. Starks missed all of his senior season with a shoulder injury and was on the physically unable to perform list with a hamstring injury for the first six games of his Packers’ career.

The Packers activated Starks on Nov. 9 and he’s been a work in progress since then, having to pick up the offense, get back into football shape and learn to get hit again.

It will be interesting to finally see what the Packers have in Starks.

Previous Article
Clay Matthews Should Have A Field Day On Sunday
Next Article
Predictions: Packers vs. 49ers