Johnson: Singletary Is A Motivational Speaker 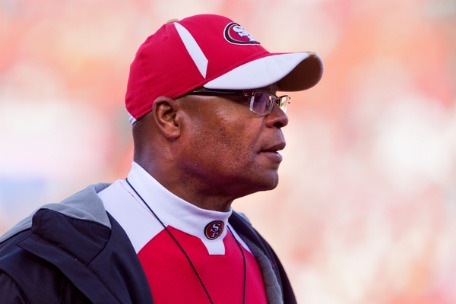 Mike Singletary will kill your children if you cross him.

Since the Green Bay Packers are playing the San Francisco 49ers this week, I thought it would be interesting to point this out. Former Dallas Cowboys and Miami Dolphins coach Jimmy Johnson said 49ers coach Mike Singletary is like a motivational speaker posing as a football coach.

I’m paraphrasing a bit, but the message is clear. Johnson doesn’t think Singletary is much of a coach and that has become pretty obvious as the season has unfolded.

Much as he was as a player with the Chicago Bears, Singletary is an intense, no-nonsense guy. I agree with Johnson, though. That only goes so far in the NFL.

One thing that successful coaches in pro sports have in common is they can successfully manage personalities. Hell, that’s something all successful managers have in common, whether we’re talking about business or sports. I haven’t been in the 49ers’ locker room, but Singletary’s my way or the highway approach seems a little dated.

In fact, watching some of Singletary’s dealings with the media has really turned me off on him as a coach. He simply has no tact and his heavy-handed approach makes him look like a moron, at times.

After finishing 8-8 last season, the 49ers are a disappointing 3-7 so far, this year. The only thing they have going for them is they play in the worst division in football, where no one is even at .500 at this point of the season.

I’d be surprised if Singletary has a head coaching job in the NFL next season. In my mind, he’s better suited for the college game.

Here’s a perfect example of what I’m talking about when it comes to Singletary and the media. The reporter was replaced after this particular segment. Rumor has it, at the request of the 49ers.