Five Packers Make Pro Bowl; Rodgers Not One Of Them 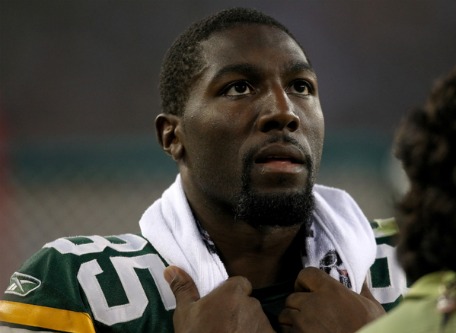 Five members of the Green Bay Packers made the Pro Bowl.

Despite appearing in the NFL’s Pro Bowl ad, quarterback Aaron Rodgers is not one of them.

Collins, Woodson and Matthews were voted in as starters.

You could also make a strong case that both nose tackle B.J. Raji and cornerback Tramon Williams were snubbed. Then again, you could make just as strong a case that neither Clifton or Collins deserves to be there.

First, the quarterback position, where Vick is the only clear-cut selection.

I think these stats pretty much speak for themselves. Brees has put up some impressive yardage and touchdown totals, but he’s also chucked a Favreian 21 interceptions. And Ryan, well, doesn’t even belong in this conversation.

The only thing I can think of is Rodgers was somehow penalized for missing time with multiple concussions. He’s currently a first alternate.

Suh is a beast and has nine sacks, so I won’t even put his stats up. He’s absolutely deserving. Smith has the stats, but I’m not sure why he got elected as an interior linemen. Ratliff, on the other hand, is a fucking joke selection. He clearly was only elected because of his past performance.

Raji is a second alternate.

In addition to Woodson, the NFC’s cornerbacks are Philadelphia’s Asante Samuel and Washington’s DeAngelo Hall.

I won’t argue with Woodson or Hall, even though Hall recorded four of his picks in one game. Samuel, like Ratliff, is a joke selection based on past merits. Samuel has only played in 10 games, this season, while Williams has developed into one of the game’s top cover corners. Williams is a first alternate.

As for Collins, I’ve thought on more than one occasion that his play has fallen off, this season. Simply, he’s missed more tackles and been out of position in the passing game more times than a Pro Bowl player should be. His interception total will drop for the second season in a row — he had seven in 2008, six in 2009 and has three so far, this season.

Clifton’s play has actually improved, this season. However, the simple fact remains that while he’s a decent pass blocker, he’s a liability in the running game. A Pro Bowl left tackle that combination does not make, in my opinion.

Of course, none of this will matter. The Pro Bowl is a joke and half the guys who end up getting elected don’t bother to show up for the game anyway, so there are bound to be some alternates getting the call.