Erin Andrews Was Super Excited To Be In Green Bay

It’s true. The Sideline Princess was in Green Bay yesterday and you missed her.

Erin Andrews visited Lambeau Field on Thursday to interview one Clay Matthews for some reason or another. She seemed pretty happy about the whole thing.

Just look at that smile! She looks like a school girl meeting Justin Bieber. 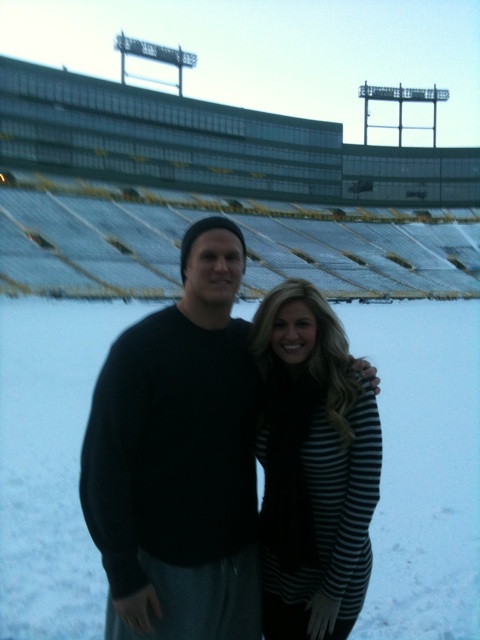 Kind of makes you wonder. Andrews has reportedly had her share of dalliances with the athletes she covers.

Of course, she was spotted with quarterback Aaron Rodgers not too long ago, but Rodgers is recovering from a concussion and, by the way the Packers are framing it, it sounds like Rodgers wouldn’t be able to find his dick if he were pissing himself.

The Packers certainly don’t want the star quarterback getting in a row with the star defensive player over some strumpet, though.

Then again, maybe they’re passing Andrews around the locker room like a bottle of champagne after a Super Bowl win.

I kid, of course. I don’t know who Andrews or anyone on the Packers is banging, except for Brandon Underwood. He’s banging prostitutes.

No, Andrews grew up a Packers fan because of her dad. So, she was understandably excited to make her first trip to Lambeau.

If you check her out on Twitter, you’ll see there are several Packers-related pics.

If only you could have been there! You totally could have asked her out!

Rodgers Is A Long Shot To Play