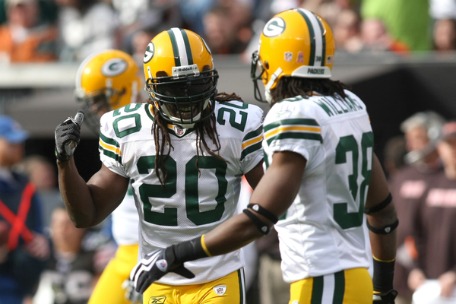 Bigby can no longer stay on the field.

Green Bay Packers safety Atari Bigby is nothing if not injury-prone.

Bigby strained a groin in Sunday’s victory over the New York Giants and has already been ruled out for Sunday’s contest with the Chicago Bears.

Obviously Bigby can’t be counted on, so why should anyone care about a guy who’s only been able to play in four games this season?

It was starting to look like Bigby was taking reps away from Charlie Peprah and even flashed some of his old play-making ability, on Sunday. Bigby recorded only two tackles before leaving, but he also hopped on the fumble Charles Woodson caused in the third quarter.

Peprah has at times been decent after taking over for the injured Morgan Burnett, but he seems to have regressed over the second half of the season. Peprah hasn’t been a factor in the play-making department and his tackling has been shoddy.

The Packers are stronger with Bigby as an option.

Unfortunately, the guy’s pretty much proven himself useless, this season.

Previous Article
Bears Won’t Rest Their Starters
Next Article
Five Packers Make Pro Bowl; Rodgers Not One Of Them