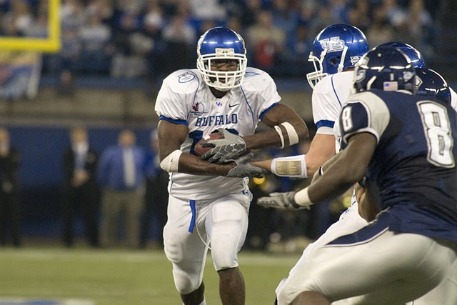 In a somewhat surprising move, the Green Bay Packers have activated running back James Starks from the physically unable to perform list.

Starks, who the Packers chose in the sixth round of this year’s draft, was in the same boat as Atari Bigby and Al Harris. The Packers had to activate him, cut him or put him on injured reserve this week, as he’s been practicing with the team for the past three weeks.

Bigby was activated Saturday and Harris was cut Monday. Most people assumed Starks would be placed on injured reserve, considering he hasn’t played a game of football since his junior year at Buffalo. Starks missed all of his senior season with a shoulder injury. He’s been out with a hamstring injury since May, meaning he didn’t participate in training camp or the majority of the Packers offseason activities.

It’s unclear whether Starks will be able to contribute anytime soon, but he’s entering a pretty crowded backfield with Brandon Jackson, John Kuhn and Dmitri Nance at halfback and Korey Hall and Quinn Johnson at fullback.

To make room for Starks, the Packers released linebacker Robert Francois, who played in three games as a special teamer. If Francois clears waivers, the Packers will re-sign him to the practice squad.