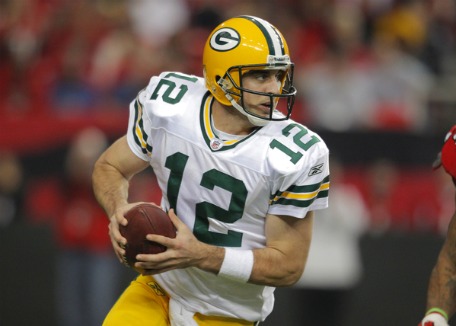 Rodgers' recent play has put him in the MVP conversation.

It would be a lot easier to make this argument if the Green Bay Packers had beaten the Atlanta Falcons on Sunday, but it’s nonetheless time Aaron Rodgers entered the MVP conversation.

Rodgers has been nothing short of spectacular over the Packers’ last three games.

In fact, he’s carried a Packers offense that has little-to-no running game, has been without it’s biggest receiving threat (Jermichael Finley) for most of the season and has been plagued by inconsistency from the remaining receivers.

Despite all of that, Rodgers has carried the Packers to a 7-4 record.

On Sunday, Rodgers went 26-of-35 for 344 yards and one touchdown and ran for a team-high 51 yards and another touchdown. Most impressive was the strike he threw to Jordy Nelson on fourth down in the corner of the end zone with 56 seconds remaining.

That play was typical of Rodgers’ overall play of late. After some inconsistency earlier in the year, Rodgers has regained the precision and timing that made him so successful last season. He’s not only finding open receivers, but he’s throwing frozen ropes again.

Of course, three games doesn’t make a season. So, let’s compare Rodgers’ season stats with those players in the MVP conversation.

Like Rodgers, the players with the best shot are quarterbacks carrying their teams.

Philadelphia’s Michael Vick has been a popular choice, thus far, but he’s only played in eight games.

Peyton Manning is always a popular choice, but the Colts have slumped to 6-5 and Manning looked terrible in Sunday night’s loss to San Diego.

The Chargers’ Philip Rivers, like Rodgers, is winning without much of a running game and with a receiving corp that’s been decimated by injuries.

Drew Brees is carrying a team with no running game in New Orleans.

Tom Brady is perhaps the top candidate, leading a 9-2 team.

In addition to stats, a lot of other factors will go into determining the MVP — team record, how important the player is to the team, supporting cast, signature wins and signature plays, to name several.

If I were handicapping the race at this point, Brady would be the favorite.

He’s carrying a team with a terrible defense — the Patriots are 31st in the NFL. He has a nondescript supporting cast — Brady’s biggest offensive weapon, Randy Moss, was traded after four weeks, which has only increased his importance. The Patriots are likely to finish with one of the best records in the league and they already have signature wins over Baltimore, Pittsburgh, Indianapolis and San Diego.

Next, Rodgers, for the reasons we stated above. The Packers’ victories over Philadelphia and the New York Jets are beginning to look more impressive as the season goes on, as well.

This could all change by the time the season ends, but at this point, Aaron Rodgers deserves consideration for NFL MVP.

Previous Article
Chillar, Havner Could Miss Extended Time, Lee On The Outs
Next Article
The Best Rivalry In The NFL Is…