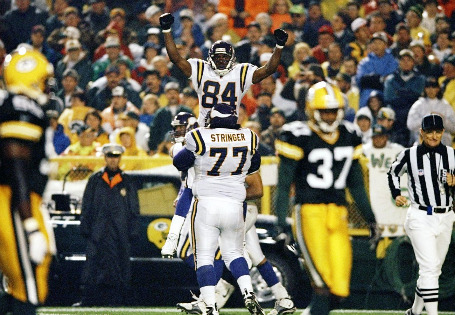 Excited to see this again?

Well, that was easy enough.

In the span of 24 hours the Green Bay Packers watched the running back everyone said they needed get traded to Seattle for a fourth-round pick and the receiver they were too stubborn to acquire in 2007 get traded to their arch rival for a third-round pick, moving at least the perceived power center of the division back to Minnesota.

The Minnesota Vikings completed their trade for wide receiver Randy Moss by sending a third-round pick to the New England Patriots this morning. The Vikings were reportedly waiting to finalize a new contract with Moss, who is in the final year of his deal, before completing the trade. However, in the end, the team decided to make the move and worry about the contract later.

Moss will team with quarterback Brett Favre and running back Adrian Peterson to form what will presumably be a dynamic Vikings offense. Peterson has carried the bulk of the load for the Vikings, who are 1-2, on offense thus far. The Vikings passing game hasn’t clicked without injured receiver Sidney Rice.

Moss’ addition should change that and when Rice returns from the physically unable to perform list, which he can do after week six, the Vikings suddenly have one of the best receiver combos in the NFL.

While everyone is abuzz about the Vikings this morning, no one is too excited about the Packers, and with good reason. Without a solid running game, which the Packers haven’t had since Ryan Grant suffered a season-ending injury in week one, the Packers are no longer the Super Bowl favorite they were in the preseason.

In fact, the most complete teams reside in the AFC (Baltimore, New York and Pittsburgh) and the best of the NFC still appears to be New Orleans.

The Vikings have a tough schedule coming up the next four weeks — at New York Jets, Dallas, at Green Bay and at New England — that could either make or break their season, but they are much better prepared to face that slate today than they were yesterday.

While the Packers sitting around and doing nothing to improve their team is in no way surprising, it’s clear they’re no longer the class of the league or even the NFC. The next few weeks will prove if they can even be considered the class of the NFC North.