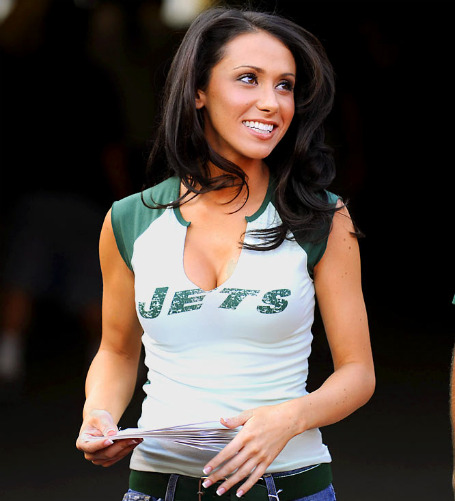 The NFL is investigating Cockgate.

League spokesman Greg Aiello said the matter is under review. When Aiello says “the matter,” he’s referring to allegations (and audio and photographic evidence) that Minnesota Vikings quarterback Brett Favre, then with the New York Jets, left desperate voicemail messages and texted pictures of his cock to then-Jets sideline reporter Jenn Sterger.

While we like to laugh at Favre for being a stupid, pathetic, desperate old man, there is a real issue here.

As the story goes, Sterger did not encourage Favre’s advances or even want them, for that matter, which, in a lot of people’s eyes, makes this a case of… wait for it… sexual harassment!

Both were employees of the Jets at the time, even if Sterger was an independent contractor, as the Jets have explained. Someone within the organization knew what was going on — Favre refers to someone trying to contact Sterger on his behalf in one of his voicemails. That person is presumed to be a Jets’ employee.

I’m not suggesting upper management was trying to help Favre bang a hot, young reporter, but the point is pretty simple.

I don’t want someone I work with sending me photos of his old, shriveled up dick. Do you?

If Favre had been having an affair with Sterger, then it’s a different story, but these were repeated unwanted advances people in the Jets’ organization allegedly knew about and possibly even helped facilitate.

What the NFL ends up doing is anyone’s guess, but mine is they’ll sweep it under the rug for “lack of evidence” or something like that. Favre is one of their most marketable stars and let’s face it, the league is about one thing over all others: money.

On the other hand, the NFL did make a big commotion about the Jets screwing with TV Azteca sports “reporter” Ines Sainz a couple weeks ago. Sainz said the team made her feel uncomfortable in the locker room and the organization made a formal apology before the league circulated a memo about how female reports should be treated in the locker room.

Hmmm… the Jets. I guess it’s where boorish behavior is tolerated. Maybe I should see if they have any openings.

Anyway, we’ll see how this plays out, but wouldn’t it be funny if Favre’s final year in the NFL turned out to be one in which he was remembered for sending photos of his cock to a reporter?

That’s the way to go out on top, Brett!

Previous Article
Another Packers License Plate For Judas
Next Article
Injury Replacements: Who To Be Worried About