by Monty McMahon
in Uncategorized
54

Honestly, this list could probably contain several hundred entries, but I decided to whittle it down to 10. So, without further ado, here are the top 10 reasons we hate the scum of the NFL — the Minnesota Vikings fan.

10. Worst. Stadium. Ever.
Now that County Stadium is no more, I can easily say the Metrodome is the worst stadium in pro sports. It’s so bad, it annually helps make the Vikings one of the poorest franchises in the NFL. So, what are you going to do about it, Vikings fan? You’re going to go out in public and complain, demand the state finance a new stadium and make a mockery of yourself, even though your state is in major debt and faced with cutting funding for things like… education. Brilliant! You sure as hell don’t need MORE education, do you? Nope. A fifth-grade reading level is just fine for a Vikings fan.

9. You’re in love with shitheels like Jared Allen
Jared Allen is a hillbilly and an ignorant, look-at-me loudmouth dick. He is not funny, even in an ironic way. His act is tired, just like his haircut and his sack celebration. Yet, you want to have his children or you want your children to grow up to be like him, Vikings fans. It’s sad, although not unpredictable. You are, after all, a bunch of backwards-ass hillbilly wannabes whose state has only given the world one noteworthy thing — Prince. Well done!

8. You think Brett Favre is your quarterback
It’s true. Brett Favre is the Minnesota Vikings quarterback, but that’s because the Green Bay Packers gave him to you. You’ve conveniently erased the memories of the 16 years he played for the Green Bay Packers as if they never happened. If you talk to a Vikings fan, they pretend like Favre has been their quarterback for the past 20 years and he’s a Vikings legend. Favre has played in Minnesota for a little over one season. When he finally retires, he’ll be remembered as a member of the Green Bay Packers. The only reason you even have him is because we didn’t want him anymore. I’d tell you to wise up and face reality, but I know that’s impossible for a Vikings fan.

7. You’ve never won a Super Bowl
Teams who win are given respect. Their fans are given respect. The Vikings… are 0-4 in Super Bowls. You get no fucking respect because you and your shitty team haven’t earned any. The Vikings don’t just lose in the Super Bowl, they do it spectacularly — they’ve been outscored 95-34, which is a total of 61 points. The Vikings are one of 14 NFL teams who have never won the big game, joining such prestigious franchises as the Detroit Lions, Jacksonville Jaguars, Cleveland Browns, Arizona Cardinals and Buffalo Bills. Losers… 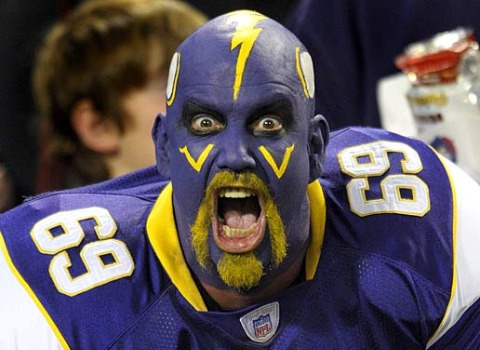 5. You don’t even go to the damn games
Do you know the last time a Green Bay Packers game was blacked out? No, you don’t, because it’s never happened. Do you know how long the Packers season-ticket waiting list is? Decades. On the other hand, you have the Minnesota Vikings, where anyone can buy season tickets because they’re never sold out. In fact, the Vikings couldn’t even sell out their season tickets when Favre arrived in the Twin Cities. As for blackouts, the Vikings were facing one as recently as Jan. 4, 2009 — a playoff game with the Eagles. A playoff game! After the NFL gave the team three extensions, they finally sold all the tickets to that game. Way to get behind your shit team, Minnesota.

Really? Are you 12 years old or do you just have the mentality of one?

Diggz here is one of Todd Glocke’s boys. You’ll remember Glocke as the idiot who rode his Vikings motorcycle to Mississippi this summer to visit the home of Brett Favre and got tons of media coverage, like no Packers fan had ever made such a trek. You’ll also remember these two turds as the guys who sent their followers — all three of them — over to this blog after we put up a post trying to help a Packers fan win a contest Glocke was competing in. They got all bent out of shape, did their usual troll shit and then pouted and stormed off. Unfortunately for the rest of the world, this is the typical Vikings fan mentality.

3. You’re just class acts
Actually, you’re the furthest thing from class acts I can think of. Not only are you constantly running your stupid mouths, but the verbal vomit that comes out is always pure, unadulterated nonsensical bullshit. Whether it’s taunting other fans (after all, your team has won so many significant games), throwing beer at someone for wearing a green hat on or teaching your children ignorance and hatred at a young age, you continue to set the bar high, Minnesota Vikings fans.

1. You have an inferiority complex
In many cases, an inferiority complex results from an imagined feeling of inferiority, rather than an actual one. That certainly isn’t the case here. You are inferior, Minnesota Vikings fans. You know it and it shows. And let me tell you this, it’s not sexy, cool or even tolerable, for that matter. Your inferiority complex, which rightfully has something to do with that Super Bowl drought, causes you to make overly bold predictions, think the Vikings are better than they really are, act like a prick to all other NFL fans and gloat incessantly when something actually goes right for your beloved team. That’s not to mention you don’t have even an ounce of humility when the Vikings get their ass beat. I’ve never once heard a Vikings fan congratulate an opposing team’s fans on a win. I’ve never once heard a Vikings fan empathize with opposing fans after they lose to the Vikings. Obviously, you’re better than everyone else Vikings fans… oh, wait… no you’re not. You’re a bunch of fucking losers, you know it and this is how you compensate.

On that note, Skol this, motherfuckers!