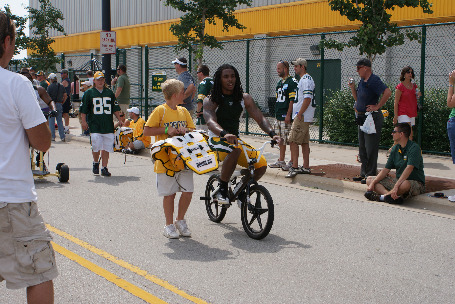 The following was filed from Green Bay Packers training camp on Aug. 1.

Perfect day here in Green Bay. It’s already 70 and sunny and it is just past 8 a.m., local time.

Quick observations…..
– Just saw some old douche rocking one of those annoying Packers/Jets/Vikings #4 jerseys with a vintage 96′ Super Bowl cap. Nobody wants him sitting next to him.
– Players are starting to arrive. It looks like Brad Jones is sitting out with a back injury this morning.
– Brett Swain and Ronald Talley are also out, as is Mark Tauscher. T.J. Lang starts in his place.
– Justin Harrell and Brady Poppinga are running with the No. 1 defense.
– Greg Jennings slips on a route, gets back up and makes a catch down the sideline.
– Jordy Nelson shows great hands on pass from Aaron Rodgers.
– Desmond Bishop delivers with a big hit.
– Graham Harrell shows quick recognition with a quick pass.
– Chris Bryan is off on his first kick, but does well after that with directional kicks inside the 20.
– Tim Masthay also does well kicking inside the 20. Both kickers put backspin on the ball, dropping it nose-first.
– Well run screen to Grant.
– Jennings on an end-around…. wasn’t touched for 15 yards.
– Brandon Jackson makes a nice move on a screen play.
– Driver with the end-around, made a decent cut upfield.
– Morgan Burnett is constantly on Darren Perry’s shoulder, getting advice. Atari Bigby is just watching.
– Nick Collins hits Grant at the line. No gain.
– Rodgers feels the pressure, steps up and completes a pass to Jennings.
– Kregg Lumpkin has a nice run outside. made a couple of nifty moves.
– Will Blackmon reads a crossing pass to Donald Lee well — no gain.
– Ryan rant slips at the line of scrimmage on a run.
– Rodgers makes a perfect pass over the head of A.J. Hawk to Jordy Nelson.
– Burnett has perfect coverage on Jermichael Finley. Rodgers had to throw it away.
– Matt Flynn with a beautiful pass to Jennings… and was hit by Campbell on the play. Red jerseys are not to be hit. Oops.
– Run defense looking strong. Grant had nowhere to go on a run outside. Hawk pushed him out for no gain.
– Charles Woodson breaks up a pass… almost a diving interception by Hawk.
– Brandon Jackson with a nice run… pushed out after a gain of 10+ yards.
– Dillon with the drop of a short pass…. naga…. notgonnamaketheteam.
– Finley almost drops a pass as it bounces off his hands, off his facemask, then he reels it in. Big play.
– Rodgers overthrows Jennings… INT to Will Blackmon. The ball went right to him.
– Bush would of had the sack on the blitz…. Flynn overthrows Moturi.
– Burnett makes a INT on Rodgers in 7-on-7 drills. Pass was tipped and Burnett made a good read on the ball.
– Dillon with an amazing tip-toe catch on the sidelines.
– Dillon makes a nice catch in traffic in front of Shields. I may retract my previous statement on his future status with the team.
– Rodgers to Jennings on a 20-yard pass in traffic.
– Practicing fake FGs right now from the right hash. Humorous since I have a hard time remembering the last time Mason Crosby made one from the right hash.
– Quick pressure on Rodgers by Brady Poppinga/Clay Matthews forces a scramble and Rogers throws it away.
– Burnett steps up a puts a hit on Jackson as he breaks through the line.
– Bishop picks off Flynn. Jarrett Bush hurt on the play.
– Grant makes a nice cut outside after the middle was jammed up… decent gain.
– Screen to Jackson would of been blown up by quick pressure from Matthews.
– Rodgers to Finley…. all day every day.
– Jackson is showing some great moves today.
– Woodson reads Rodgers and drops a reasonable pick. Athletic to get there but it’s a play he usually makes.
– Mike Neal reads a screen perfectly.

Thoughts on the Day:
The offense looked a little sloppy, which seems typical early in training camp. Rodgers is looking razor-sharp but he is still holding onto the ball for extended periods of time. My hope is that he is just trying to give a WR a play and that his in-game time clock is a little better, but we will have to wait and see on that.

The punting competition really does look like it is neck-to-neck with both punters looking substantially better than any from the recent past. Masthay seems to be a little more consistent on long punts but his punting style looks a little different to me… like his kick comes almost in a side-kick type of fashion. I’m not sure how Masthay’s style will hold up in cold weather, but with the constant rain this area has been getting recently, we may get a chance to see.

Morgan Burnett has the look of a starter whether Bigby is back or not.

A warning to would-be visitors to training camp… DON’T wear a #4 vikings jersey. That is about as smart as the guy who wore a LeBron James Heat jersey to a Cleveland Indians game recently. Get a life and get a new jersey OR expect the worst.

Another tip to those who stop by training camp… make a note of which end zone has the camera tower in it. That will be the half of the field the team scrimmages offense vs. defense.