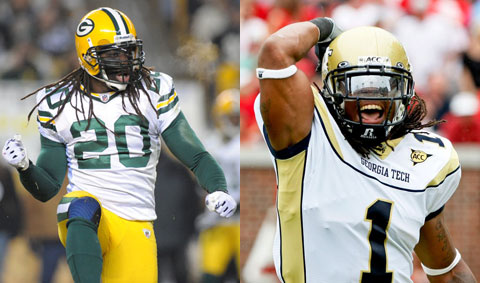 Atari Bigby and the guy who's going to take his job

Breno Giacomini running with the No. 2 offense
Maybe this is due in part to T.J. Lang being a little banged up, but Breno Giacomini has been lining up with the second-string offense at right tackle and even lined up with first string during the morning practice, which Mark Tauscher has off. I can’t say I’ve ever been sold on Giacomini. He seems to play a little too high (which is hard not to do when you are 6’8″) and has trouble with speed rushers. It’s difficult to have confidence in a guy like Giacomini. He’s made the team, but has been a healthy inactive for almost every game during his Packers career, whereas Lang has been battle tested in actual games on both the left and right sides. This is definitely a situation I’ll keep my eye on.

Quarless’ gain may be Lee’s loss
We’ve heard how tight end Andrew Quarless could be the next Jermichael Finley. He’s an athletic tight end with above average receiving skills. What I was surprised about was the blocking ability Quarless has shown. He’s handled most linebackers he’s faced. Is he a dominant blocker? No. But can he be the best blocking tight end on the team? It wouldn’t surprise me. Since the Packers like versatile guys, I feel like Spencer Havner’s spot on the team is relatively safe, especially because he can split out wide as a flanker. The question then is Donald Lee. Sure, Lee is a decent blocker, but it’s nothing to get too excited about and his receiving skills are wildly inconsistent. Lee is a model citizen and a good leader, but being a nice guy only gets you so far. There is probably one spot available between Quarless and Lee and the improvement by Quarless may leave Lee without a job.

The return of James Jones
Big day for receiver James Jones. He seemed to be on the end of every big pass. My coronation of Jordy Nelson as the No. 3 receiver may be a bit premature if Jones has more days like today.

Another day, another big play
Rookie safety Morgan Burnett showed great coverage skills, almost had one INT, and reeled in a pass that deflected off Donald Driver. This may sound redundant, but this guy is a stud.

Sam Shields muffs an opportunity
One guy I’ve been trying to promote is undrafted free agent cornerback Sam Shields as a return guy, but he didn’t do himself any favors today. He is always one of the first guys to practice catching punts from the jugs machine, but he had trouble with punts on multiple occasions today.

Speaking of punters…
It seemed like a slam dunk that this year’s punters would be much better than those of years past. No so fast. In team drills near the goal line, with heavy pressure on the punter, most of the punts seemed late getting off and had little hang time and distance. Every once in a while they would launch a bomb, but the kicks under duress left much to be desired.

Play of the day
My play of the day came on a near interception by Burnett. In a game situation, offense vs. defense, Aaron Rodgers felt pressure and threw the ball away towards the sideline. No one seemed to be in the area, but Burnett came from nowhere and made a spectacular diving interception with his feet barely out of bounds. Even though the result was a non-play, we were able to witness Burnett’s range, awareness, and playmaking ability. It’s plays like these that keep me up at night. I can’t wait to see what the guy does next.

Goat of the day
The offense, plain and simple. The defense is usually ahead of the offense early in training camp, but they really took it to the offense today. The offense didn’t seem as physical and threw way too many interceptions. The offense also had trouble moving the ball in almost every situation, except during 7-on-7 drills. Offensive linemen were running sprints after practice and I can only imagine that it’s related to their performance today.

Previous Article
Rejoice! Jarrett Bush Will Not Be Your Nickel Back!
Next Article
Lambeau Field Will Not Host Big Ten Championship