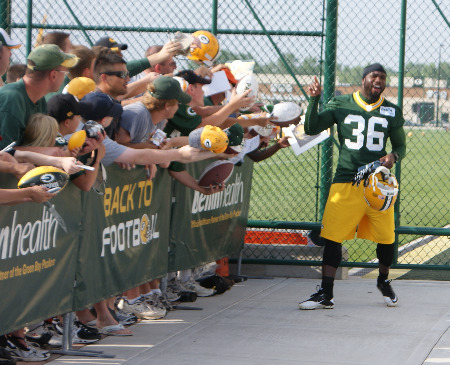 Nick Collins has no time for your autograph requests.

Team drills
– Brandon Chillar gets the nod at OLB with Brad Jones still out.
– Looks like we’ll have a long portion of team drills. Not much to report during those.

Game situation, offense vs defense
– Aaron Rodgers bootleg to left… pass to wide open Charles Dillon. The ball was underthrown but caught.
– Swing pass to Quinn Porter from Matt Flynn — caught with ease.
– Screen to Kregg Lumpkin is well executed.
– Screen to Brandon Jackson from Rodgers — decent, but not great.

Special teams, punting
– Chris Bryan starts out with two great punts.
– Tim Masthay starts with a huge punt that would of been a touchback. His second was much better — caught at the 10.
– Bryan’s next two kicks are average at best. Both landed around the 20, but were wobbly.
– Masthay has two booming kicks, the second landing on the 10.
– I’d give the nod to Masthay today

Thoughts from the morning practice:
Not much to talk about regarding a morning practice in shells that spent a majority of the time in team drills. It is a little sad that the punting competition was by far the most exciting thing to watch during practice, but at least it seems like the Packers SHOULD be better off in that position this year.

I saw the discussion after my first observations talking about punt and kick returners and I thought I’d add my two cents. First off, Will Blackmon has shown he can be an above average punt returner and a horrible kick returner. In his best year in ’08, his kick return average was barely north of 19 yards per, which was good for last in the league for a full-time returner. Blackmon has also been an injury waiting to happen which makes him a little unreliable. Jordy Nelson has the look of a breakout player this year but his return skills remind me of Mike Prior, in that he is typically going to catch the ball… and that’s about it. A guy to watch that has a real chance of making some noise is UFA Sam Shields from The U. He was originally recruited to Miami as a WR, but he couldn’t catch so he was moved to cornerback. He has the type of fearless attitude and the top-end speed to be a great return guy, but we won’t know for sure until he does it in a game situation. If mini-camps, OTAs, and training camp count for anything… he has been a guy that has really impressed me.

I’m hoping to make the night practice today but the weather may not allow it. Keep the comments coming and I’ll do what I can to keep an eye on anything you guys are interested in.