The Losers In Minnesota Keep Lining Up 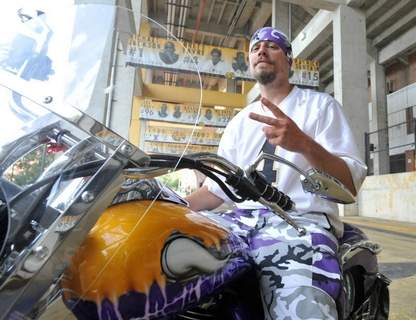 Trolling a junior high school near you.

If we only had a firing squad here at Total Packers, we’d all be much better off.

That way, when these ignorant, moronic, mouth breathers from Minnesota line up for their latest Brett Favre stunt, we could do society and future generations a favor.

Frankly, the stench of idiocy emanating from Minnesota never ceases to amaze me. I don’t know why. You’d think I’d be used to it by now. I have, after all, been informed of the negative effects of inbreeding.

But whether it’s renting billboard space, buying ads in the local paper or making terribly unfunny video pleas, Minnesota Vikings fans still manage to consistently make our world a dumber and more desperate place by their actions. I guess that’s what happens when your team has never won a Super Bowl. Ever.

The latest in Minnesota’s Brett Favre Mania is this: a pilgrimage.

That’s right. And not just any pilgrimage, but a pilgrimage to Hattiesburg, Miss., home to one Lord Brett Favre on the Vike Bike.

Todd Glocke, and the three idiot friends who plan to make the trip with him, are described as a Brett Favre die hards, which I can totally understand, since Favre has led the Vikings for 16 seasons one season.

Glocke must be the rare Vikings fan who was a Favre fan when the quarterback played for the Green Bay Packers, otherwise, I’m not sure how he could call himself a die hard.

Anyway, Glocke, along with Darin Troftgruben, Diggz (with a Z, awesome!) Garza and Herman Abrams, are riding their bikes to Hattiesburg to watch Lord Favre work out with the Oak Grove High School team, to make a stop at Southern Miss, where The Lord played his college ball, and to visit The Broke Spoke, the saloon in Favre’s hometown of Kiln.

“The night (the Vikings) lost to (the Saints in the NFC Championship), I just was thinking about how the season was the best I could remember,” Glocke, 40, said. “And if it wasn’t for Brett Favre, (the Vikings) wouldn’t have gone that far. So lately I’ve been thinking about what a fan could do to thank him.

“So I thought I could drive the motorcycle down there just to say, ‘Thanks.’”

Todd, please give Brett my thanks, too. Thank him for throwing the Vikings season away and keeping your run of playoff futility intact.