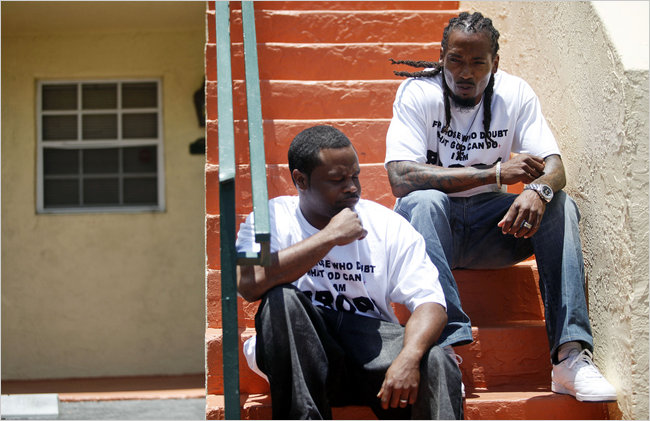 If you’ve checked out any of the videos of Green Bay Packers cornerback Al Harris rehabilitation this offseason, you’ve noticed the consistent presence of rap music. Specifically, you’ve heard the lyric “the proof is coming soon,” on several occasions.

Someone asked what the music was and where it came from, and honestly, I had no idea. I tried to Shazam it on my iPhone and the results were nil.

Finally, I heard about Harris’ 31 Entertainment, which was said to be producing the music, but I couldn’t find the website or anything relevant in the search results.

Well, now the mystery has been solved, thanks to the New York Times.

The music is a project developed by Harris and childhood friend and convicted felon Kevin Soto.

Soto turned his life around with help from music, God and Al Harris. He now counsels prisoners and is an upstanding member of the church, which brings me back to the music you’ve heard in the Harris videoes.

Soto is the rapper and goes by the name of Proof. The music is meant to be real hip-hop, but with a Christian message.

“We’re going to change everything,” Harris said. “This is a movement. We’re saying, you can do all the right things and still be cool.”

“All these years, music kept coming up, kept bringing us together,” Harris said. “It always came back to music, no matter what we did, or where we went.”

I’m not really one for Christian rap, rock or otherwise, but I am a hip-hop head from back when hip-hop was relevant and real, and I will say this: from what I’ve heard, the beats and the production are solid. If you can tolerate the feel-good, be-good message, there’s definitely something there.

Previous Article
Is Westbrook Still An Option In Green Bay?
Next Article
The Losers In Minnesota Keep Lining Up