Minnesota Vikings quarterback Brett Favre has never been known as a fashion plate.

I’ve never seen him wear a tie, he always has an old t-shirt and baseball cap on during press conferences, and he endorses Wrangler jeans, which sums things up pretty nicely.

In short, he has no taste, which is obvious when you look at the football team he decided to play for after being released by the New York Jets.

This, however, takes the cake.

Complex.com released a list of the top 50 athlete style fails. Coming in at No. 37, although he probably should have been much higher, was none other than Lord Brett Favre. 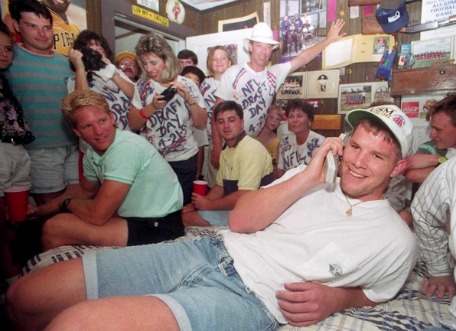 That's right, I'd like to order a tighter pair shorts.

Yes, I know some of you from Wisconsin are wondering what’s wrong with this photo.

Let me explain: everything.

OK, so this photo was taken in 1992. That still doesn’t make it right.

And please, by god, if you know someone who still dresses like this today — and I know they’re out there, I’ve seen them creepily leering at your children — punch them in the face and tell them to get with the times. They’re giving the fine state of Wisconsin a bad image.

Anyway, here’s what Complex had to say about the Favre style.

Nothing like the corn-fed vulnerability of Brett Favre’s upper inner man-thigh to remind you how innocent we all were when this Aryan-American was drafted. What was that just 50-60 years ago? *Sigh* We were so happy, so innocent then. Tight-ass jean cuffed shorts didn’t HAVE TO foreshadow the unfortunate tight-ass Wrangler jeans that would become this iconic sportsman’s trademark so many, many decades later. Yet, here we are.

This photo also makes me wonder what Favre’s draft-day plan was. Pack as many people with homemade shirts into his wood-paneled bedroom as possible?