Adrian Peterson’s Fiancee Was In Playboy

Hey, it’s the slow part of the offseason, so we’re going to make sure to bring you as much news revolving around our primary non-Green Bay Packers interest — broads — as possible.

We’ve told you about Matthew Stafford’s broad and Aaron Rodgers’ broads and now we’re going to tell you about Minnesota Vikings running back Adrian Peterson’s broad.

Said broad, Ashley Brown, posed for Playboy’s Girls of the Big 12 issue in October ’06. Brown, who attended the University of Oklahoma and dated Peterson in college, appeared under the name Ashley Thompson.

Brown and Peterson are now engaged.

If there are some of you who are appalled at this news, I could really care less. Unclench your asshole and stop being so uptight.

As for the rest of you, enjoy. 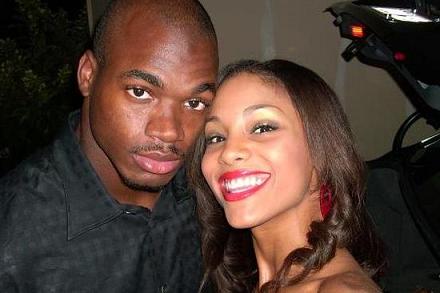 A recent photo of Peterson and Brown

And now, the real deal.

These photos — although not nude — were removed at the request of some uptight advertiser.