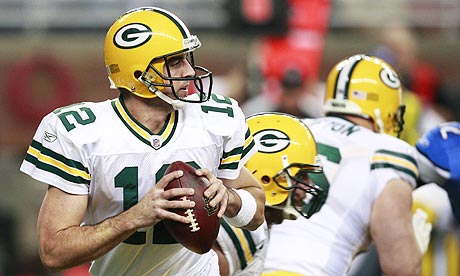 I’m less than excited about this for a couple of reasons.

First, I think King is way off base about as much as he’s right about anything.

Second, it’s fucking May and training camp is still more than two months away. So yeah, you probably can accurately choose who the best team in the NFL is, right now…

But hey, this is Peter King we’re dealing with here, so idiocy is a given.

Anyway, if you want an early dose of Packers’ Super Bowl fervor, here it is. Just remember how many people thought the Chicago Bears were legitimate Super Bowl contenders after they landed Jay Cutler last offseason.

It’s not just the maturation of Aaron Rodgers. It’s the carryover from a fluky end to 2009 (the weird playoff loss at Arizona) and the fact that only one team in football — New Orleans — had a better point differential than the Pack’s plus-164 last year. I like Jermichael Finley to become a great player in his second starting season. I don’t trust the pass-rush (where Clay Matthews is the only real thing), and I worry about two of the top three corners coming off ACL surgery, and aging. But the defensive front is formidable, and a very good match for the good run teams of the AFC North. I also like Weeks 2 through 5 on the schedule (Buffalo, at Chicago, Detroit, at Washington), which sets up for a strong start.

I’m not crazy about that pass rush or cornerback situation, either, but hey, why don’t we wait until at least August before we anoint the Packers the best team in the league?