Looking At The Packers As Preseason Favorite 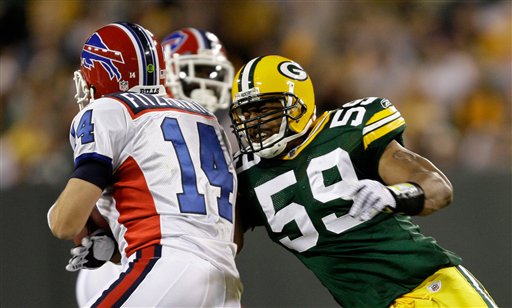 Jones will go a long way towards determining the Packers' fate.

You hear a lot more about the idea in the national media than you do in the local media, that of the Green Bay Packers as a preseason favorite.

Peter King ranked the Packers atop his preseason power rankings. Pro Football Weekly and Yahoo! Sports will declare the Packers their Super Bowl favorite in their 2010 NFL preview magazine, due in June.

Our guess is that, like us here at Total Packers, the state media expects the Packers to be pretty good in 2010. But while the national media is finding a lot to like about the Packers, we still see many of the same holes that cost the Packers several games in 2009 and ultimately ended their season.

You know the list – poor special teams play, lack of a pass rush outside of Clay Matthews, suspect pass defense and a creaky, leaky offensive line. So, while the Packers will return 21 of 22 preferred starters from an 11-5 team featuring one of the most dynamic quarterbacks in the NFL, there are still some questions.

It’s true that we tend to point out the potentially disastrous situations our favorite general manager, Ted Thompson, has created or ignored, but let’s say we’re cautiously optimistic about the Packers’ chances in 2010.

Nothing is won in May and we put little stock in preseason rankings, making this an “on paper” exercise,” but we’re still pretty sure the Packers don’t look like the best team in the NFL.

If you’re asking for a preseason favorite, you have to consider the New York Jets, who not only made the AFC Championship game last season, but upgraded their team at several key positions, including wide receiver and cornerback, and enter 2010 with a more seasoned Mark Sanchez at quarterback.

The San Diego Chargers are a close second. The Chargers have a great passing game, and they seemingly addressed their biggest offensive deficiency through the draft by adding running back Ryan Matthews in the first round. The Chargers also possess one of the best groups of specialists in the NFL, with kicker Nate Kaeding and return man Darren Sproles. This is a team that finished 13-3 with an 11-game winning streak in 2009.

Beyond that, until the Packers show they can beat Brett Favre and the Minnesota Vikings, it’s hard to crown them NFC North champions, much less Super Bowl champions.

Brad Jones will have to provide a legitimate pass rush threat.
The Packers completely ignored the outside linebacker position in the offseason, despite several pundits naming it the team’s biggest need. Their lack of action is a sign the coaching staff believes in Jones (or Thompson is a brain-dead idiot). Jones had four sacks last season in seven starts, which is more than Aaron Kampman had (3.5) in nine. Jones, who was a rookie in 2009, should get better in his second season, but whether he’s a legitimate NFL starter who can hold up over a full season remains to be seen. The Packers are betting he is. Jones better deliver.

The offensive line will have some turnover.
The Packers offensive line was terrible during the first half of last season. The unit improved when right tackle Mark Tauscher returned to the starting lineup at mid-season, but overall, they were less than good. Left tackle Chad Clifton, when not injured, was a shadow of his former self and left guard Daryn Colledge looked like a sieve. The Packers drafted Bryan Bulaga to take Clifton’s place, but it’s questionable whether that will happen this season. Meanwhile, Colledge has been thrown into a competition with Jason Spitz for his starting spot. T.J. Lang will also push for a starting spot somewhere on the line. Clifton and Tauscher, who are 33 and 32, respectively, are going to continue to regress as age takes its toll. Colledge’s play has regressed the past two seasons even though he should be reaching his prime, at 28. If the line is going to improve, it looks like new talent has to step up. That likely means one, two and potentially three new starters show they are ready for prime time.

The secondary will return to form.
The Packers’ secondary used to be the strength of the defense. That’s before they got exposed in losses to the Minnesota Vikings, Pittsburgh Steelers and Arizona Cardinals, last season. You could argue the secondary was weak in those games because of injuries. At one time or another, the Packers were without Al Harris, Will Blackmon, Pat Lee and Atari Bigby. Harris, Blackmon and Lee all finished the season on injured reserve. Much like outside linebacker, the Packers didn’t touch the cornerback position in the offseason. That means the team expects Harris to return to his old form and Lee, who’s done absolutely nothing as a member of the Packers, to stay healthy and live up to his status as a second-round pick. The team moved Blackmon to safety, where he’ll provide depth, providing he has the same burst he had before tearing his ACL. The Packers also drafted safety Morgan Burnett, who’s expected to provide a challenge for Bigby, who, when he isn’t injured, has proven nothing more than an average safety. Harris, in particular, will have to show he’s still a top flight corner and, in all likelihood, Burnett will have to replace Bigby as a starter.

Certainly, these things are all possible, but they’re also big ‘ifs.’

Another big if is the question of whether a special teams unit ranked dead last in the NFL will improve. Frankly, there’s nowhere to go but up, but at the moment, there are too many variables to consider.

Ultimately, it’s a little too early to jump on the Packers’ Super Bowl bandwagon with so many unknowns.

Right now, we’d be happy if the Packers proved a worthy challenger for the NFC North crown.